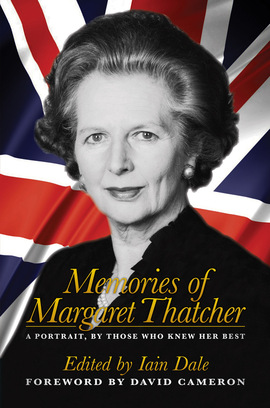 Memories of Margaret Thatcher A portrait, by those who knew her best

All royalties donated to the Margaret Thatcher Foundation

Margaret Thatcher is a British icon. There is no denying her place in history as Britain’s greatest peacetime Prime Minister.

The reaction to her death confirms that twenty-three years after leaving office she still bestrides the political scene, both in Britain and around the world, like a colossus. Margaret Thatcher was elected to Parliament in 1959. Twenty years later she became Britain’s first woman Prime Minister.

She achieved two further landslide election victories, making her the longest serving British Prime Minister since Lord Liverpool. She resigned in November 1990 after eleven-and-a-half years at the pinnacle of British politics. Memories of Margaret Thatcher brings together over 200 personal reminiscences and anecdotes from those who – whether political friends or opponents, observing her from the press gallery or toiling to keep her flame alight in the constituencies – experienced close encounters with the Iron Lady.

Amusing, revealing, sympathetic and occasionally antagonistic, these observations combine to give a unique portrait of the political and personal life of a remarkable woman. They show the deeply private and compassionate nature of a woman who will forever be known as the Iron Lady.

People Like Us
Behind Diplomatic Lines
Something Has Gone Wrong
Margaret Thatcher: The Honorary Jew