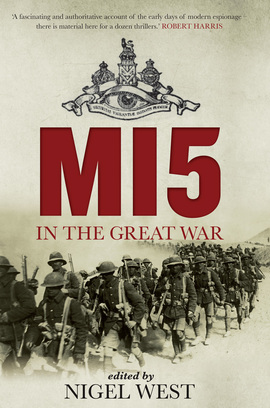 MI5 in the Great War

In 1921, MI5 commissioned a comprehensive, top-secret review of the organisation’s operations during the First World War. Never intended for circulation outside of the government, all seven volumes of this fascinating and unique document remained locked away in MI5’s registry … until now.

Recently declassified and published here for the first time, MI5 in the Great War is filled with detailed, and previously undisclosed, accounts centring on the Security Service’s activities during the conflict. The main narrative examines MI5’s various attempts to both manage and detect double agents; the detection and execution of enemy spies; its study of German pre-war espionage; and the Kaiser’s personal network of spies seeking to infiltrate British intelligence.

Coinciding with the centenary of the start of the Great War, this historically significant document has been edited and brought up to date by bestselling writer and historian Nigel West, providing an extraordinary insight into the early years of MI5 and its first counterintelligence operations.

[T]his précis is just the ticket, and has the feel of a fictional adventure.

Nigel West makes full use of declassified documents and letters to reveal the full scope of this second front, and transforms the complex ups and downs of espionage into a gripping tale of subterfuge that stretches across the globe.

A fascinating and authoritative account of the early days of modern espionage – there is material here for a dozen thrillers.

Once again our foremost chronicler of MI5, Nigel West, has pulled off another literary coup in a career full of them... Fascinating and invaluable.

This edited account of MI5’s bureaucratic structure and investigatory strategies is fascinating.