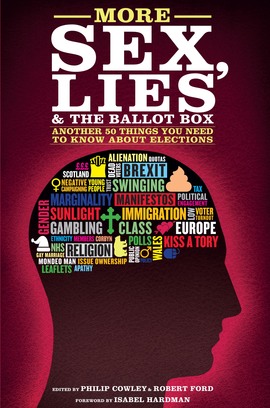 More Sex, Lies and the Ballot Box Another 50 things you need to know about elections

With a foreword by Isabel Hardman

HAVE YOU EVER WONDERED…

… how people feel about sleeping with the political enemy?

… whether gambling markets are best at predicting political outcomes?

… who Santa Claus would vote for?

Then look no further. More Sex, Lies and the Ballot Box brings us another collection of concise chapters penned by leading political experts and delving into the fascinating field of electoral politics. Following on from the success of its bestselling predecessor, this illuminating book shines a light on how we vote in Britain and around the world.

Forget mind-numbing numbers and difficult demographics. This sharp and frequently hilarious volume is fizzing with accessible facts and figures that are more than just conversation starters – they’re unexpected insights into the human condition.

“Shrewd, witty, bravura de-bunking. The essential accessory for every political anorak. Each chapter is a cruel and forensic exposé of the ill-informed clichés of political reporting. This book must be banned. The country’s top political academics do their party pieces: bite-sized brilliant distillations of learning, like conjurers’ table magic.”

“With political tumult everywhere, we need to know what influences voters... This book assembles an array of experts to tell us in crisp and pithy style.”

“A refreshingly accessible book of nuanced, witty insights that will be a welcome salve for those grappling with the current state of British politics.”

“Political anoraks can rejoice. The 'essential accessory' is said to be on the way - in the form of Philip Cowley and Robert Ford’s new book on electoral politics.”

Sex, Lies & the Ballot Box
My Hair Is Pink Under This Veil
First Lady
101 Ways to Win an Election