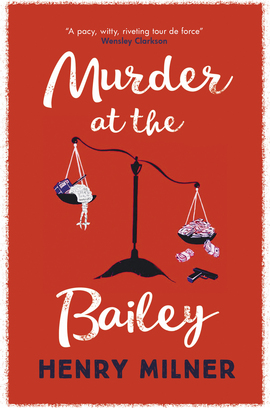 Murder at the Bailey

'This is a brilliant and believable novel due to the author being one of the UK's top criminal lawyers. Gorgeously entertaining. A fantastic debut from a new rising star.' Frost Magazine

A notorious loan shark is shot dead, in broad daylight, right outside the front doors of the Old Bailey. The killer is arrested at the scene and Adrian Stanford is lined up to take on the toughest defence case of his career. Can he steer his client past the no-nonsense Detective Chief Superintendent ‘Iron-Rod’ Stokes, hell-bent on achieving a murder conviction in his last case before retirement? That’s assuming he can keep his client alive in prison long enough for the trial to go ahead. Can his illustrious defence QC, Patrick ‘The Edge’ Gorman, swerve the case past the acerbic judge known to all as Mack the Knife, whose own resolve is being tested to the limit by an adulterous wife? And why is London underworld numero uno Big Jake Davenport showing such a keen interest in the proceedings?

A wickedly eccentric cast of brilliantly drawn characters populate this daring debut from one of Britain’s top criminal defence lawyers. Dripping with sparkling dialogue and delicious wit, Murder at the Bailey is a masterly picaresque romp through the courtrooms, custody suites and London restaurants graced by the cognoscenti.

“Fast, funny and readable, Murder at the Bailey is an enjoyable romp through a criminal world more recognisable decades ago: rogues’ justice often prevails, against a background of colourful lifestyles – from expensive restaurants and bars to flashy cars and mistresses… Few lawyers can turn their hand to fiction after a lifetime processing the dry details of the law. Milner clearly can, and with verve and humour.”

No Lawyers in Heaven