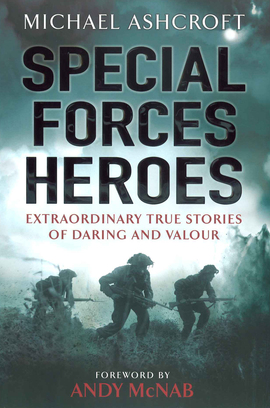 From the Cockleshell Heroes' daring 1942 raid deep into Nazi-occupied Europe, to the rescue of hostages from the clutches of terrorists at the Iranian Embassy in 1980, to the dangerous sorties into enemy territory during the Gulf wars, the actions of Britain's Special Forces truly epitomise heroism.

'When you go home, tell them of us and say,
For your tomorrow, we gave our today.'
John Maxwell Edmonds

Fascinated by bravery ever since he was a boy, Michael Ashcroft set about assembling what is believed to be the largest private collection of British Special Forces medals in the world. This four part, prime-time, series first broadcast on FIVE, draws on gripping stories from the collection which epitomise the heroism, professionalism and skill of our Special Forces. With first hand testimonies from those who were involved, the series captures the full drama of the events

This book tells the stories of forty heroes, all awarded bravery medals for their conduct during Special Forces missions over the last 150 years.

Often covert hit-and-run operations involving very small numbers of highly skilled men, those who partake in these missions know that their goals involve a high level of risk. They are men who would die for their country, no questions asked. With many incredible stories, particularly from the Second World War, including the Cockleshell Heroes, and other conflicts from the twentieth century, such as the Iranian Embassy siege, this collection of real-life action adventure brings the bravery of Britain's heroes to life.

Every medal in Lord Ashcroft's extensive collection tells a story and these are some of the most thrilling.