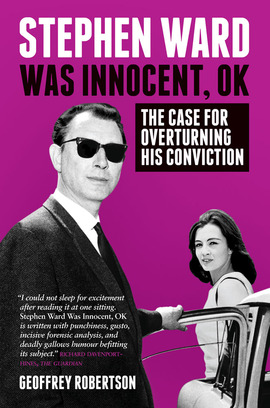 Stephen Ward Was Innocent, OK The Case for Overturning his Conviction

In the summer of ’61 John Profumo, Minister for War, enjoyed a brief affair with Christine Keeler…

Late in the afternoon of Wednesday 31 July 1963, Dr Stephen Ward was convicted at the Old Bailey on two counts alleging that he lived on the earnings of a prostitute. He was not in the dock but comatose in hospital. The previous night he had attempted suicide, because (as he said in a note) ‘after Marshall’s [the judge’s] summing up, I’ve given up all hope’. He died on Saturday 3 August, without regaining consciousness. Many observers of the proceedings thought the convictions did not reflect the evidence and that the trial was unfair, and this book will show that it breached basic standards of justice.

Geoffrey Robertson brings his forensic skills and a deeply felt sense of injustice to the case at the heart of the Profumo affair, the notorious scandal that brought down a government.

The funeral of Stephen Ward, at Mortlake Cemetery in August 1963, attracted only six mourners. This distinguished osteopath and skilled portrait artist, a favourite of London’s fashionable society throughout the 1950s, had died by his own hand. At the grave lay a wreath, made up of one hundred white carnations, and a card signed by Kenneth Tynan. It bore the simple inscription: To Stephen Ward, Victim of Hypocrisy

Brick by brick, Robinson builds up an unassailable case. This is no dry as dust legal document: It has dramatic pace, atmosphere and tragedy.

The most elegantly written application ever to have been sent to the Criminal Cases Review Commission (CCRC) […]The book presents a compelling case for overturning the guilty verdict.

[A] compelling case for appeal.

GR floods a dark corner of legal history with brilliant light, exposing the lengths to which the Establishment would go to protect the old order and to cover for their own. A stunning exposé.

Stephen Ward was a scapegoat and a victim both of calumny and a miscarriage of justice, which together drove him to suicide. In this compelling account, beautifully written and argued, Robertson rescues Ward's reputation from the lies and legal distortions that condemned him.

I could not sleep for excitement after reading it at one sitting. Stephen Ward Was Innocent, OK is written with punchiness, gusto, incisive forensic analysis, and deadly gallows humour befitting its subject. Anyone who wants a thumping, indignant read as an antidote to Yuletide complacence should be given this polemic in their Christmas stocking.

The author of Stephen Ward Was Innocent, OK (Biteback Publishing), has revealed his book has been submitted as part of a posthumous appeal to clear Stephen Ward.

Robertson masterfully analyses the evidence while conducting a compelling narration through a voice of controlled anger. The telephone bugging, surveillance and interviewing of Dr Ward's patients send familiar shivers at the compulsive distorted hounding of one man. This book throws down the gauntlet of justice.

[This] book makes a passionate case for a posthumous pardon.

Robertson concentrates with clarity and vigour on the legal shortcomings of the case.

It is essentially a legal opinion and it shows Robertson at his most polished and considered, without exaggeration.