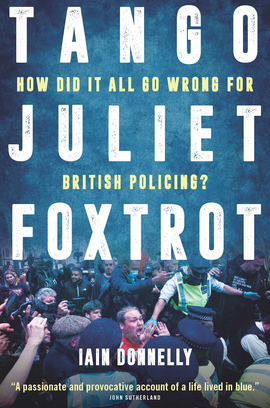 Tango Juliet Foxtrot How did it all go wrong for British policing?

In thirty years on the front line of British policing, there is very little that Iain Donnelly didn’t do: from being a uniformed constable on the beat in London to running counter-terrorism and surveillance operations, combatting child sexual exploitation and overseeing the investigation of the most serious crimes. During that time, he saw the job change irrevocably, to the point where the public no longer knows what to expect from the police and the police service no longer knows what to expect of itself.

Tango Juliet Foxtrot – police code for ‘the job’s fucked’ – reveals how constant political meddling and a hostile media narrative have had a devastating impact on the morale of police officers and their ability to protect the public. With the organisation cut by 20,000 officers and 23,000 police staff, only 7 per cent of reported crime now results in a charge – compared with around 20 per cent ten years ago.

By turns fascinating and funny, poignant and uplifting, this compelling account paints a vivid picture of what life is really like for those tasked with keeping us safe – and, crucially, explores what needs to change to secure the future of British policing.

“A compelling, candid and fluently written account that will serve as an important contribution to the debate about policing and criminal justice in the UK.”

“A damning verdict on politicians and political meddling in policing from a top cop with thirty years’ experience on the front line. Laying bare the impact of manpower cuts and ridiculous targets, Iain Donnelly reveals the truth about the pressures of working in CID, in counter-terrorism and on harrowing child abuse cases. Theresa May, look away now!”

“A passionate and provocative account of a life lived in blue.”