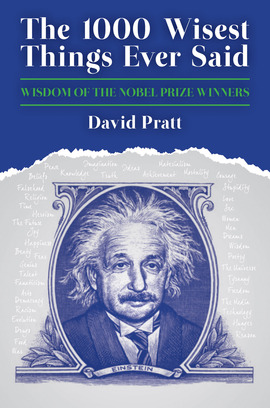 The 1,000 Wisest Things Ever Said Wisdom from the Nobel Laureates

The difficult is what takes a little time; the impossible is what takes a little longer, said Fridtj of Nansen, who personally repatriated more than 400,000 prisoners of war after World War I and helped save millions of Russians from starvation. Albert Einstein prudently advised, Not everything that counts can be counted, and not everything that can be counted counts and Cseslaw Milosz warned, In a room where people unanimously maintain a conspiracy of silence, one word of truth sounds like a pistol shot. Since 1901, the Nobel Prize has been the hallmark of genius, but Nobel laureates tend to be more than merely brilliant their idealism, courage and concern for humanity have also made them sources of inspiration and wisdom. Contrary to the notion that geniuses are absentminded eccentrics, many Nobel laureates have been social activists and political leaders, and some have been polymaths whose interests and talents were diverse, such as Philip Noel-Baker, winner of the 1959 Peace Prize, who ran in three Olympic Games. The quotations here are grouped by such themes as achievement, truth and falsehood, war and conflict, technology, and most have never been anthologised previously.

Snakes and Ladders
In the Shadows
Unmasking Our Leaders
Independent Nation