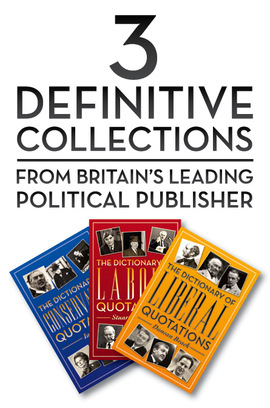 The Dictionary of Quotations Collection

Fancy owning the definitive collection of political quotations? We’ve put together all 3 of our quotations books for the price of 2.

The Dictionary of Conservative Quotations

‘It’s time for a rethink, and the Tory Party – the funkiest, most jiving party on Earth – is where it’s happening.’ Boris Johnson

‘They have the usual Socialist disease: they have run out of other people’s money.’ Margaret Thatcher

‘It is better that some should be unhappy than that none should be happy, which would be the case in a general state of equality.’ Samuel Johnson

‘It is a good thing for an uneducated man to read books of quotations.’ Winston Churchill

You’ll need this thoughtful and entertaining assembly of conservative quotations if you’re at all keen on politics. With more than 2,000 key quotes, this authoritative collection contains all the best conservatives and their sayings, whether they were standing up for what’s right or standing up to the left, showing off their wit or showing that their foes were witless. It’s got all the big names: everyone from Aquinas to Bagehot, Churchill to Cameron, Shakespeare to Thatcher. In The Dictionary of Conservative Quotations you’ll find humour (Quayle) and inspiration (Burke), political punches (Hague) and ancient wisdom (Aristotle), all wrapped up into one slick, easy-to-use compendium. This book makes a vital reference source for anyone who cares for politics or the Conservatives and is a must-have for everyone with an interest in conservative thought.

The Dictionary of Labour Quotations
‘The power of words is fundamental to political life. They help to influence, convince, change minds and appeal. By looking through the history of the left, this book provides a clear demonstration that what you say, and how to say it, really matters.’ Philip Collins, chief leader writer and columnist for The Times, and former chief speech-writer for Prime Minister Tony Blair

‘This book has pulled off the difficult trick of bringing together the varied thinking and views of the left. It captures the seriousness and also the humour of the left. It’s a must for anyone interested in the Labour Party, or in wider British politics.’ Paul Richards, Labour activist, columnist, former special adviser and author of Be Your Own Spin Doctor

Anyone who has an interest in Labour or the left needs a copy of this brilliant compendium of left-leaning quotations. The collection features all the best quotes from all the great thinkers, whether they were reactionary or revolutionary, campaigning or policy-making, thinking aloud or writing it all down. The likes of Marx, Miliband, Attlee and Aristotle stand side by side in this neat reference guide, where you’ll find the best of Brown, Blair and Balls along with all that Rousseau, Robespierre and Russell had to say.

The Dictionary of Labour Quotations brings together insights, remarks, retorts, wit and wisdom, making it essential reading for everyone with a passion for the Labour Party, socialism or the left side of politics.

The Dictionary of Liberal Quotations
‘A liberal is a man or a woman or a child who looks forward to a better day, a more tranquil night, and a bright, infinite future.’ Leonard Bernstein

‘I am for peace, retrenchment and reform, the watchword of the great Liberal Party thirty years ago.’ John Bright

‘Few organisations can debate for three days whether to stage a debate, hold a debate, have a vote and then proceed to have a debate about what they have debated. But that is why the Liberal Democrats hold a special place in the British constitution.’ Patrick Wintour

If you’re a liberal or a democrat, and especially if you’re a Liberal Democrat, this masterful and considered collection of thought-provoking quotations should belong to you. All the great Liberals are packed into this slick reference guide, from Gladstone to Ashdown, Kennedy (John F.) to Kennedy (Charles). Whether you’re looking for John Stuart Mill or John Maynard Keynes, you’ll be able to find every good quote there is on Liberals and Liberalism. Writers, thinkers, journalists, philosophers and even the politicians themselves contribute with nearly 2,000 utterances, musings, provocations, jibes and diatribes featured in The Dictionary of Liberal Quotations, making this guide a must-have for anyone interested in Liberals and Liberal thought.

Each offering a little humour, a little wisdom and a whole lot of fun.