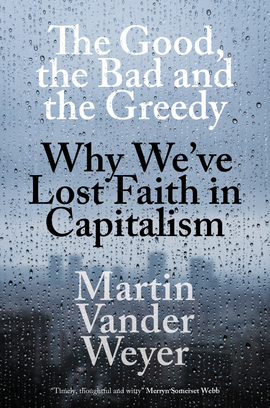 The Good, the Bad and the Greedy Why We’ve Lost Faith in Capitalism

From the Industrial Revolution to the internet, capitalism has been a great engine of human progress. But now it stands accused of allowing the greedy few to run riot over the rest of society, exploiting workers and suppliers and recklessly damaging the planet in pursuit of profit. Where did these accusations come from – and are they true?

In this lively critique, Spectator business editor Martin Vander Weyer argues that capitalism has indeed lost its moral compass, has lost public trust and is in urgent need of repair.

But this is no far-left analysis seeking to champion a thinly veiled Marxist platform. Written from the point of view of a deep admirer of entrepreneurship and private-sector investment as a proven path to innovation and prosperity, The Good, the Bad and the Greedy argues that businesses always operate in a social context and that a ‘good’ business in a moral sense can also, in a perfect world, be a business that richly rewards its creators and backers.

From the writer whom Boris Johnson called ‘the most oracular and entertaining business commentator’ in London, this thoughtful critique of 21st-century capitalism formulates core principles that separate the good from the bad and the greedy and warns that the system must be reformed and faith in it restored – before the next generation commit the ultimate act of self-harm by rejecting capitalism in favour of something worse.

“We have a problem: we know capitalism works, but we also know most people think it doesn’t. Being pro-capitalism isn’t fashionable but it is right. How do we sort this out? This timely, thoughtful and witty book offers some excellent answers.”

“Martin Vander Weyer has written a magisterial analysis of how modern capitalism has lost its soul. With public support for free-market capitalism evaporating, we need to restore the sense of purpose and obligation that the greatest companies once possessed but which has been lost in a jumble of management-speak, mission statements and cost controls. The Good, the Bad and the Greedy is essential reading for anyone who wants to understand why a system that has delivered unprecedented prosperity has also become so unpopular – and who wants to start figuring out what we might do about it.”

“Martin Vander Weyer makes a clear case that capitalism is not dead – but is often broken by broken people.”

“This book is a highly engaging combination of economic history, finance and philosophy. It tries to answer the really important questions about business and markets. Whom do companies serve? Can they be more ethical and remain successful? Is reform needed? It covers the critical subjects of tax, executive pay and philanthropy in a balanced and brilliantly readable way. It should be recommended reading for investors, managers, entrepreneurs and politicians – or indeed anyone interested in debating the strengths and weaknesses of the free-enterprise system.”

Luke Johnson, entrepreneur and former chairman of Channel 4 and the Royal Society of Arts

“The Good, the Bad and the Greedy explains clearly, with humour and in an easily readable form, how financial markets work, how they affect us all and how from time to time a few greedy undesirables find ways of misleading the public and swindling them. Regulations to prevent fraud exist, but regulators are always slow to catch up. Many firms with decent directors are often too big for top management to supervise effectively what is happening at street level. The result is that public trust in the system gets damaged. Martin Vander Weyer proposes changes to repair that damage and, in particular, to re-establish the City of London’s reputation. Even if you feel you have no stake in capitalism, you still ought to know its pros and cons. This is a good way to find out.”

“Capitalism works best when it enables, through ownership, citizens to have a stake in the nation. It fails when it adulates the making of money without a social or moral purpose. Martin Vander Weyer’s laser mind shows the way out of our present turbulence.”

Lord Vinson, industrial entrepreneur and founder-director of the Centre for Policy Studies

“A handbook for a new start: a thoughtful analysis of what has gone wrong in the financial world, and the history of how that has come about.”

“Alongside its investigations of Capitalism, the book is fascinating on the problems of introducing new regulatory regimes.”

The New Snobbery
Greater
The Corruption of Capitalism
Nine Crises