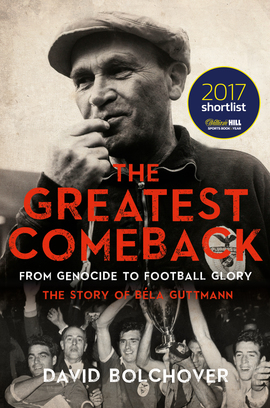 The Greatest Comeback: From Genocide To Football Glory The Story of Béla Guttmann

Shortlisted for the William Hill Sports Book of the Year Award 2017.

Before Pep Guardiola and before José Mourinho, there was Béla Guttmann: the first superstar football coach, and the man who paved the way for the celebrated coaches of the modern age.

More extraordinarily still, Guttmann was a Holocaust survivor. Having narrowly dodged death by hiding for months in an attic near Budapest as thousands of fellow Jews in the neighbourhood were dragged off to be murdered, Guttmann later escaped from a slave labour camp. He was one of the lucky ones. His father, sister and wider family perished at the hands of the Nazis.

But by 1961, as coach of Benfica, he had lifted one of football’s greatest prizes: the European Cup – a feat he repeated the following year. Rising from the death pits of Europe to become its champion in just over sixteen years, Guttmann performed the single greatest comeback in football history.

This remarkable story spans two visions of twentieth-century Europe: a continent ruptured by barbarism and genocide, yet lit up by exhilarating encounters in magnificent cities, where great players would strive to win football’s holy grail. With dark forces rising once again, the story of Béla Guttmann’s life asks the question: which vision of Europe will triumph in our times?

“A fascinating, brilliantly told biography of Europe’s first superstar football coach, The Greatest Comeback is a moving, terrifying and inspirational story of survival and triumph. If you’re a football fan and Béla Guttmann is just a name you have seen in the lists of European Cup-winning managers, take the time to read about the man. It is an astonishing journey.”

History and memoir offer insights into other times and lives that make Britain’s current miserable travails marginally more tolerable. The Greatest Comeback by David Bolchover is astonishing, not least for its unlikely melding of football and mass murder, two of my daily passions.

“David Bolchover has produced a remarkable work: as a history book alone, it carries the reader through a hideous chunk of the twentieth century in the most deft and compelling way, while as a biography of a great football coach it is both original and definitive.”

“Packed with insight and interesting debate, The Greatest Comeback is both deeply poignant and extremely topical. David Bolchover has expertly woven one huge, tragic strand of twentieth-century history together with a great footballing story.”

"...sensitively and lovingly drawn. A remarkable life has the thoughtful, passionate biography it has long deserved."

'Thoroughly enjoyed this book. Much more than the story of a football manager. Some vital reminders of anti-semitism'