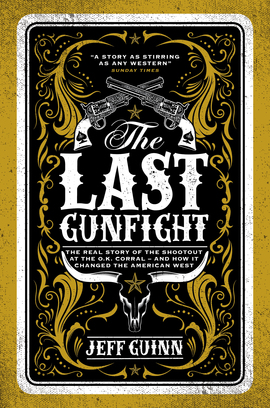 The Last Gunfight The Real Story of the Shootout at the O.K. Corral - And How It Changed the American West

Sheriffs and outlaws, cattle rustlers, frontier prostitutes, renegade Apaches – this is the Wild West as it really was…

On the afternoon of October 26, 1881, in a vacant lot in Tombstone, Arizona, a confrontation between eight armed men erupted into a deadly shootout. The gunfight at the O.K. Corral shaped how future generations came to view the Old West, and made Wyatt Earp, Doc Holliday and the Clantons the stuff of legend. But the truth is even better.

Drawing on new material from private collections – including diaries, letters and Wyatt Earp’s own hand-drawn sketch of the shootout’s conclusion – and painstaking research, The Last Gunfight is entertaining, illuminating and the definitive work on the Wild West’s greatest shootout.

A story as stirring as any western.

The most thorough account of the gunfight and its circumstances ever published.