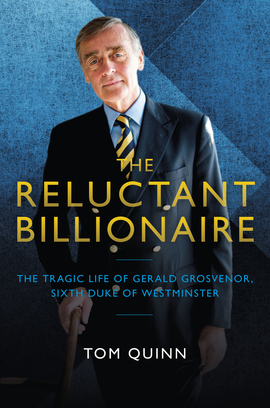 The Reluctant Billionaire The Tragic Life of Gerald Grosvenor, Sixth Duke of Westminster

When Gerald Grosvenor, sixth Duke of Westminster, died in August 2016 he was one of the world’s richest men, his fortune estimated at just under £10 billion.

Yet he hated his wealth and spent long periods suffering from severe depression, much of it brought on by a feeling that his whole life had been a failure and that his money had destroyed any chance of happiness. At the same time, he could be ruthless in running the business while often feeling he was only a mascot.

Gerald Grosvenor came into the line of succession by mere chance – or ‘rotten bad luck’ as he put it. The third Duke was childless and the title passed to a cousin, who became fourth Duke in 1963 and then, when he died four years later, to his younger brother, Gerald’s father, Robert Grosvenor, who lived on an island in Lough Erne where Gerald grew up.

Tom Quinn interviewed the sixth Duke on a number of occasions as well as people who knew the duke socially or had at various times worked with or for him. He discovered a complex man tortured by what he saw as his failures. He was a man who longed to return to his idyllic rural childhood yet was only really happy as an adult in the company of call girls. The book looks at the long and often eccentric history of the Grosvenor family and its wealth and the complex means by which that wealth has been shielded from the taxman, as well as the bizarre life of a man who was that strangest of things: The Reluctant Billionaire.