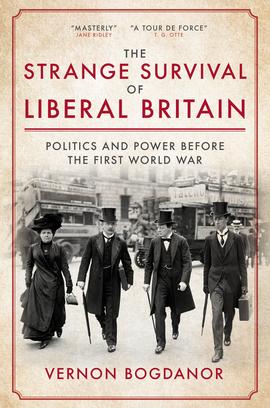 The turbulent years of 1895 to 1914 changed Britain’s political landscape for ever. They saw a transition from aristocratic rule to mass politics and heralded a new agenda which still dominates today. The issues of the period – economic modernisation, social welfare and equality, secondary and technical education, a new role for Britain in the world – were complex and difficult. Indeed, they proved so thorny that despite the efforts of the Edwardians they remain among the most pressing problems we face in the twenty-first century.

The period has often been seen as one of decadence, of the strange death of liberal Britain. In contrast, Vernon Bogdanor believes that the robustness of Britain’s parliamentary and political institutions and her liberal political culture, with the commitment to rational debate and argument, were powerful enough to carry her through one of the most trying periods of her history and so make possible the remarkable survival of liberal Britain.

In this wide-ranging and sometimes controversial survey, one of our pre-eminent political historians dispels the popular myths that have grown up about this critical period in Britain’s story and argues that it set the scene for much that is laudable about our nation today.

“Masterly. The debate over the tumultuous years before 1914 has occupied historians ever since George Dangerfield published The Strange Death of Liberal England in 1935. Vernon Bogdanor gives a magisterial rebuttal, demonstrating the robustness of Britain’s institutions at a time of political change. He provides a fascinating tour d’horizon of the Edwardian political scene. This must be a definitive account.”

“The Strange Survival of Liberal Britain is a masterly tour de force, a triumph of scholarly achievement, sympathetic in its treatment of the subject, eminently wise in its judgement and invariably fair in its verdicts. It purrs along like a Rolls-Royce engine as it takes the reader through the changing landscape of a crucial period in the making of modern Britain.”

“Brilliant. Instantly the leading history of this turbulent and critical period in Britain’s transition towards a modern democracy.”

“If you think you know the British political scene from 1895 to 1914, think again. Vernon Bogdanor has the habit of unearthing gems that have been missed by others. He does it again in this magisterial work on post-Gladstonian Britain by challenging some of the long-established myths about this period that deserve to be cast aside.”

“Professor Bogdanor is the UK’s pre-eminent constitutional historian, and here he brings profound learning and pellucid exposition to the challenge of unravelling British politics in the era before the First World War. He argues with conviction and sometimes passion but always with judiciousness and in the light of deep reflection. The result is a masterly work which speaks to the politics of our own time.”

“An extraordinary exploration of a political world whose dynamics continue to shape the future of liberal constitutionalism in the twenty-first century.”

“This brilliant book from Britain’s most important constitutional historian upends the orthodoxy about the decadent Edwardians. Vernon Bogdanor challenges the cliché of a bloated and feckless age, compelling us to see this rich period in all its creativity and contradictions. It is a masterpiece of intelligent history, both forceful and subtle, which transforms how we view not just those most complex Edwardians but also our own equally complex times.”

Professor Richard Aldous, author of The Lion and the Unicorn: Gladstone vs Disraeli

“As generations of students know, Vernon Bogdanor is an unrivalled expert on history and politics, and this book brilliantly brings together his thoughts – crisp, authoritative and lucid – on a vital, transformational period of Britain’s past.”

“In providing a detailed exploration of constitutional and political change in the decades preceding the First World War, Vernon Bogdanor succeeds in dismantling the idea that these years witnessed the demise of liberalism in Britain. On the contrary, this book demonstrates how liberalism became fully integrated into British political life throughout the twentieth century, a dominance continuing to the present.”

“There could be no more complete and comprehensive political history of the two decades before the Great War than he has compiled … A crucial and fascinating period in British history made intelligible.”