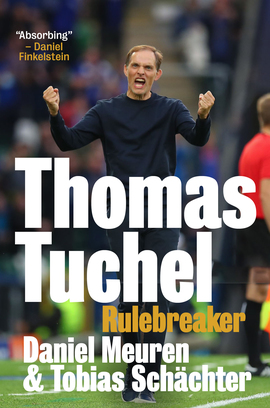 By Daniel Meuren and Tobias Schächter

When Thomas Tuchel arrived at Chelsea in January 2021, having been unceremoniously sacked by PSG, few could imagine that a mere four months later he would be leading the Blues to victory in the UEFA Champions League final. Tuchel inherited a misfiring Chelsea side that he quickly galvanised with his exciting attacking style and brilliant tactical thinking. But who is Thomas Tuchel? Fans of his former clubs PSG, Borussia Dortmund and Mainz would describe him as one of the best football managers in the world.

An innovator, tactician, rulebreaker and sometimes controversialist, Tuchel went from a youth manager with Mainz to the top of the Bundesliga with Dortmund in just five years. He has identified and nurtured rising talents, such as André Schürrle and Christian Pulisic, and has also managed dressing rooms full of superstars, including Neymar and Kylian Mbappé.

This is the definitive story of Thomas Tuchel: from his early days as an academy player at Augsburg and as a young manager at Mainz, to his successful but conflict-laden stint at Dortmund, his bittersweet tenure at PSG and finally his arrival mid-season at Chelsea. Compelling and revealing, Thomas Tuchel: Rulebreaker provides a fascinating insight into the life and mind of one of the most exciting coaching talents in football today.

“Absorbing. An essential primer for Chelsea fans and a warning to everyone who isn’t a Chelsea fan.”

“Daniel and Tobias were on the Tuchel train from the beginning and they give you the full story of one of the most fascinating coaches in the game. Instructive and revealing for the novice and with plenty of freshness for seasoned Tuchel watchers too. A very satisfying read.”

Kicking Back
Get It On
Sacré Bleu
Blood and Circuses