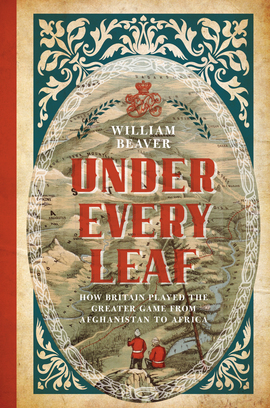 Delving into an encyclopaedic array of little-known primary sources, William Beaver uncovers a vigorous intelligence function at the heart of Victoria’s Empire. A cadre of exceptionally able and dedicated officers, they formed the War Office Intelligence Division, which gave Britain’s foreign policy its backbone in the heyday of imperial acquisition.

Under Every Leaf is the first major study to examine the seminal role of intelligence gathering and analysis in ‘England’s era’. So well did Great Britain play her hand, it seemed to all the world that, as the Farsi expression goes, ‘Anywhere a leaf moves, underneath you will find an Englishman.’

"An impressive insight into the world of Britain’s first intelligence officers."

"Does much to restore the 'missing dimension' that secret service historians are always talking about."

"William Beaver is a national historical torch-bearer who shines new light into High Victorian British intelligence. He has succeeded in turning their own methods on the men who staffed the War Office’s Intelligence Division – above all, their tenacity and imagination. This is a fine read."

"This magnificent and very welcome book fills a large gap in our knowledge of British intelligence before the advent of MI5 and the Secret Intelligence Service, dispelling the myth that nineteenth-century Britain was unwilling to sully its hands with espionage activities. Extensively researched and powerfully written, it is a must for anyone interested in the Great Game that Queen Victoria’s spies played in defence of her Empire."

“William Beaver’s study of Victorian Empire-wide military intelligence is not only pioneering but sets the precedents that other institutional historians would be wise to follow. He writes with authority, measured admiration and sprightly wit about the men who ensured that Victorian Pax Britannica was intelligence-based and intelligence-led. The intelligence practitioners creating imperial policy at their desks or implementing it in the field come alive in this scholarly study, which no historian of British intelligence should be without.”