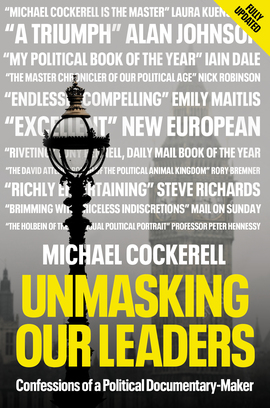 Unmasking Our Leaders Confessions of a Political Documentary-Maker

A Daily Mail Political Book of the Year

Our political leaders spend their careers spinning their images and polishing their achievements; Michael Cockerell has spent his professional life stripping off the gloss. Over fifty years, he has gained unrivalled access to the secret chambers of Westminster and Whitehall. Here, he reveals in illuminating and often hilarious stories what our top politicians are really like behind the mask.

Drawing on his unique experience of having filmed all the past ten Prime Ministers, Cockerell tells how he manages to lull some of the wariest people in the land into candour, and shows how questions of sex are never far from the surface in Westminster. Amongst much else, he recounts: how Margaret Thatcher flirted with him on screen but attacked him by name in the Commons; how Tony Blair said he would willingly ‘pay the blood price’ in Iraq; how David Cameron learned from Enoch Powell always to make a big speech on a full bladder – and how Boris Johnson admitted to doubts about his ability to be Prime Minister.

Funny, riveting and above all revealing, Unmasking Our Leaders is an absorbing insight into half a century of British politics.

“Michael Cockerell is the Prime Minister of the political documentary”

“Peppered with enough funny stories, juicy quotes and tantalising insights to make it as captivating as Cockerell’s celebrated documentaries”

“Michael Cockerell is a legend in my book”

“Riveting … Written with panache and acumen”

“I am hugely excited by Michael Cockerell’s book. His remarkable access to the great and the good gives him endlessly compelling insights into our leaders and what it is to wield power.”

“The most delightful, absorbing and thoroughly entertaining book about politics you will ever read. A triumph.”

“Michael Cockerell is the Holbein of the televisual political portrait. I have been nagging him for years to write this book. It was worth the wait – and how.”

“From the man whose camera captured them, and whose questions revealed them, comes the compelling tale of politicians’ relationship with television, from Churchill’s secret screen test to this day. Stuffed with intimate anecdotes and scattered with decades of his own scoops, Michael Cockerell reminds us why he is the master.”

“Hugely entertaining and revealing – my political book of the year.”

“Michael Cockerell is the David Attenborough of the political animal kingdom – endlessly fascinated and fascinating.”

“The master chronicler of our political age tells the story behind the stories of those who’ve held power in Britain.”

“From Harold Wilson to Boris Johnson, Michael Cockerell has known them all, and done more than any political journalist to go beyond the caricatures. This richly entertaining memoir casts fresh light on what he made of them… and what they made of him.”

“Brilliant … As enthralling a history of modern British politics as you will find anywhere … Richly stuffed with anecdotes and gags and as compelling as a Jack Reacher thriller, though with fewer dead bodies … In this funny, riveting and utterly illuminating book, Cockerell doesn’t just reveal what our politicians are really like, but offers great insights into the wider nature of the human condition.”