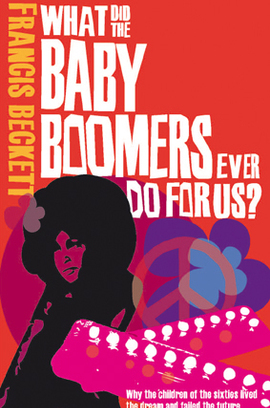 What Did the Baby Boomers Ever Do For Us?

The first of those born in the baby boom following the Second World War came of age in the radical sixties. Not since 1918 had the young talked of serious revolutionary politics like they did in the sixties. But in 1918, the men who came back from the war knew that the world was amiss, and what they had to do about it. When, at last, the generation that fought the Great War came to power, they changed the world. By contrast, the generation that came after decayed fast. For the first time since the Second World War, there was money, there was safe sex, there was freedom, and no one bothered to stop and remember the price earlier generations paid for this. Most of them hardly realised the deprivations of their parents, and the struggle that had taken place to ensure that they were not equally deprived.

What began as the most radical-sounding generation for half a century turned into a random collection of youthful style gurus, sharp-toothed entrepreneurs and management consultants who believed revolution meant new ways of selling things, and Thatcherites, who thought freedom meant free markets, not free people. At last it found its most complete expression in New Labour, which had no idea what either revolution or freedom meant, but rather liked the sound of the words.

While the philosophy of the sixties seemed progressive at the time, the baby boomers we remember are not the political reformers, but the millionaires. In What did the Baby Boomers ever do for us? Francis Beckett argues that the children of the 60s betrayed the generations that came before and after, and that the true legacy of the swinging decade is ashes.

‘What Did the Baby Boomers Ever Do for Us? returns Sixties mythology to history. The mirror Beckett holds up to the recent past is smeared with the suffering of young people today.’ – Laurie Penny, New Statesman

’Another boomer has belatedly woken up to the problems they have left us – Francis Beckett in his brilliant new book, What Did the Baby Boomers Ever Do for Us?" – Rosemary Urwin, Evening Standard

‘Grey-haired hippies will read this book and shudder; the rest of us, though, will read it for the splendid stories and shafts of insight.’ – Dominic Sandbrook, BBC History Magazine