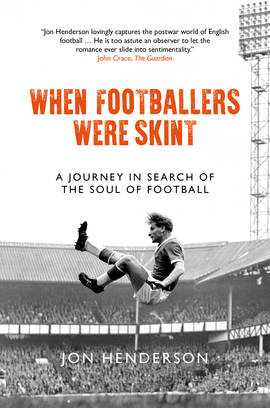 Long before perma-tanned football agents and TV mega-rights ushered in the age of the multimillionaire player, footballers’ wages were capped – even the game’s biggest names earned barely more than a plumber or electrician.

Footballing legends such as Tom Finney and Stanley Matthews shared a bond of borderline penury with the huge crowds they entertained on Saturday afternoons, on pitches that were a world away from the pristine lawns of the game’s modern era. Instead of the gleaming sports cars driven by today’s top players, the stars of yesteryear travelled to matches on public transport and returned to homes every bit as modest as those of their supporters. Players and fans would even sometimes be next-door neighbours in a street of working-class terraced houses.

Based on the first-hand accounts of players from a fastdisappearing generation, When Footballers Were Skint delves into the game’s rich heritage and relates the fascinating story of a truly great sporting era.

This is both an important historical record as well as an immensely entertaining book. Highly recommended.

Henderson has spent four years interviewing former players who are now in their 80s and whose stories were in danger of being forgotten. Time colours everything, but while there is something undeniably attractive about footballers being rooted in their communities, travelling to games by public transport and earning a similar amount to the fans who came to watch them – if the game did ever have a soul, this might have been that era – Henderson is too astute an observer to let the romance ever slide into sentimentality.

Interviewing 23 now-elderly former players whose careers fell into this period, Henderson uses their memories to paint a vivid picture of the hopes and aspirations, trials and tribulations of young men who earned only a few pounds more on the pitch than their fathers had down the pit.

Henderson has produced a wonderful book, thoroughly researched and entertainingly written, that should be seen as an essential test for anyone wishing to understand the history of football and also the social history of the country.