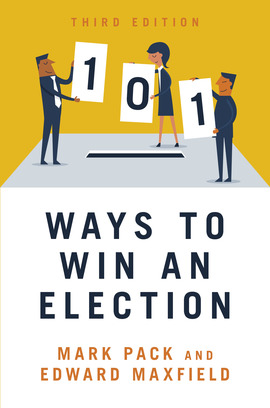 Ahead of the publication of the third edition of his book 101 Ways to Win An Election, Ed Maxfield put his own advice to the test- by running for election!

If you were going to stress-test the new edition of 101 Ways To Win an Election you could ditch thirty-five years of party affiliation and run for election as an independent candidate. An extreme step, maybe, but we have to make sacrifices for our craft…

I’ve been a member of Norfolk County Council for the past four years. I’ve enjoyed the job immensely and felt that, in a small way, I have been able to make a difference for the communities I represent. Of course, it was those reasons, not because I needed to test the effectiveness of our election campaigning manual, that made me decide to run for re-election. Having left my party last year, that meant running as an independent, giving up on all the resources that come with being a party candidate. I genuinely did turn to the book to remind myself of the key bits of advice we gave to candidates. Here are the key lessons I learned:

Set the terms of the election. I often say the most important takeaway from the book is a line of my co-author Mark Pack: define the job you are seeking as one that you, and only you, can do. Failing to define a winning message is a mistake I see repeated over and over in elections. Sometimes candidates will forget to come up with a clear message at all. Sometimes they will talk about issues they care about but that don’t chime with the electorate. Sometimes they will rely on slogans without substance. Often, more often than not, they fail to explain why the things they are talking about matter – why they can do the job in a way the others cannot. I didn’t have a party brand but I did have the benefit of experience and a record of working hard for local people. I knew my opponents would spend as much time attacking each other as they did talking about the things they wanted to achieve – that created the space to explain why an independent candidate could get things done.

Devise a winning plan. I knew that my opponents would have resources that I could not match. I knew we would all be campaigning in the midst of a pandemic and its ever-changing restrictions. I knew my strengths and my weaknesses and I had a pretty good idea of theirs. I thought I knew the timetable but even that was thrown into doubt with debate over whether the elections would take place in May. It was a great test of my aversion to ‘off-the-shelf’ campaign plans because, as an independent, I had to start from scratch – I had no shelf, let alone a plan! That really made me think about all the strengths and weaknesses, the external factors and shifting landscape that feed into any successful plan in any field.

Build a team. This really was an election like no other. It was difficult or even illegal to do many of the things we normally do to get our message across. But that didn’t alter the scale of the task. It is so easy to underestimate the amount of work that is needed to win an election. Especially as an independent. I never forgot that everyone who voted for me would be changing the way they normally vote. I never took anyone’s vote for granted. I could not have won without the support of a large team of friends and local residents who helped my campaign – you cannot do it alone!

Listen and learn. The pandemic forced even an old dog like me to take digital communications seriously. I set myself some rules to protect my sanity and actually had a lot of fun with it. On every aspect of the campaign I made sure I listened to trusted friends and acted on their advice (sometimes after a bit of sulking if they told me I was getting it wrong). I also listened to local voters and watched what my opponents were doing. Never letting them dictate the campaign, never complaining when they did smart things. But always being willing to adjust and tweak and adapt.

Make sure you know why you are doing it. It’s a theme running through all three editions of our book. Whatever your politics, it is vital that you run a campaign that is consistent with your own values and beliefs. That way, win or lose, you know you will have made the right choices.

Ed Maxfield is co-author of 101 Ways to Win an Election, which has just been re-published in its third edition. In May 2021 he ran for election as an independent candidate in the Norfolk County Council elections. He won by seventy-six votes and continues to represent Mundesley division on the council.

Get your copy here.