Sex, Lies and Politics: a (rough) guide to the General Election 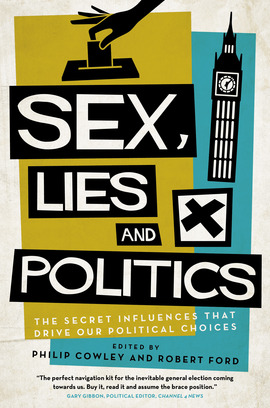 The election is almost upon us. All around the country, people will be taking to their ballot boxes and casting their votes for the next ruling party.

At the same time, an intricate system of vote counters, exit poll reports and nervous politicians will spring into action. Though it’s a system that might look complicated to the naked eye, here are a few insights from Philip Cowley and Rob Ford’s book Sex, Lies and Politics which might help to make sense of the confusion.

Fact One: we tend to mis-measure electoral participation

Though it might surprise you to hear it, we don’t measure electoral turnout in the UK accurately- which is strange, as it’s an important indicator of democratic health. Once you take duplicate and inaccurate registrations into account, you have to look at the number of people who are eligible to vote but not registered. Or the students who are registered to vote in two places. Or the people who never update their records when they move house, causing inaccuracies.

Given that we measure electoral turnout by dividing the number of votes cast by the ‘total registered electorate’, this is a problem that we haven’t yet managed to solve… but probably should.

Fact Two: the Downing Street cat can influence how we see politicians

We’ve all heard of Larry, the Downing Street cat, who took up his position in 2011. Larry and his ilk are resolutely apolitical: after all, they don’t care who’s feeding them, as long as they get fed. But this isn’t how they’re seen by the rest of the electorate. In an experiment, members of the public were shown pictures of Humphrey the cat and were told that he was Blair’s cat, and then Thatcher’s cat.

Unsurprisingly, the way that he was received differed depending on his supposed owner, depending on the viewer’s political views. Similarly, our own political attachments colour our views of anything that we associate with politics. Voters around the time of the 1997 election tended to support policies associated with Tony Blair and Labour, but reject identical policies associated with John Major and the Conservatives. We don’t tend to give politicians a fair hearing: bear this in mind next time you hear one of them trying to explain his views on live television!

Fact Three: the average voter is a woman

Women are more likely to be undecided voters and make their minds up about who to vote for closer to the day in question. Women say that they are less interested in politics than men- by 70% to 62%- though this policy is reversed when they are asked about specific policies like health or education.

They also have the potential to drive elections. In the past, women have tended to vote in much the same way as their male counterparts- until 2017, where significantly fewer women voted Conservative than men, by a whole 12 percentage points. Are UK voters starting to mirror US ones? Or was this just a blip?

Either way, keep your eyes peeled.

Interested in finding out more about the upcoming election? Check out Sex, Lies and Politics here and order your copy now!