Q+A with Will Hayward

For a sneak peek into what's inside Independent Nation: Should Wales leave the UK? read our quickfire Q+A with author Will Hayward. 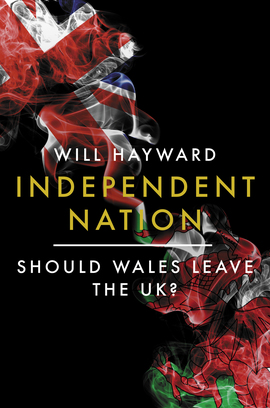 If you could give your book to three influential people with the power to bring about change for Wales, who would it be and why?

The first two books I would just give to a library. This book isn’t for politicos but for people in Wales (and beyond) to come to an informed opinion on an important issue. We saw from Brexit what happens if you don’t have accurate impartial information to debate from – you end up not asking the right questions. This book helps people ask the right questions.

I would give my final copy to strategists in Plaid Cymru. They stood in the last Welsh parliamentary elections on an indy platform. Despite this, they didn’t make clear the risks associated with a course of action. I feel this was a dereliction of duty. Asking people in Wales to jump through a door without telling them what was on the other side. I hope that this book would enable them to run a more open and clear campaign in the future. That way people in Wales can make an informed decision.

What is the greatest misconception about Welsh independence?

If we are talking about outside of Wales, I think it is the fact that the advocates of independence don’t have legitimate grievances. In my experience, the majority of people who have come to independence in recent years have not come to it because of feelings of identity (though that is often a secondary factor).

They have simply looked at the current set-up of the United Kingdom and concluded that it isn’t working for Wales (or England, Scotland or Northern Ireland for that matter). I totally understand this feeling. Wales is often an afterthought within the union and the high poverty rates show that something has to change.

Now, I am not saying that indy is the answer, but it is easy to appreciate why there is disgruntlement with the status quo. I think it also speaks to the intransigence people perceive in the current Westminster set-up that they feel that breaking up a union of 700 years is easier than getting the UK to reform.

In the book you speak about Brexit and EU membership as being key motivators within the indy movement. How important are they?

I actually considered not even including an assessment of an indy Wales joining the EU; after all, it is for an independent Wales to decide. However, as it was such a big motivator for many, especially those who have come to indy since 2016, I felt it needed to be addressed.

I concluded that if rejoining the EU is your driving motivator for indy, then you are misguided. Just think of the time frame. Let’s say Wales voted to leave the UK in ten years’ time (which is an insanely rapid time frame). So, in 2032, a referendum was held and Wales voted to leave. It would not be independent the next day, and frankly it would be madness to try to be. Given that it took the UK four and a half years in total to leave the EU after the referendum, it will likely take Wales longer than this, given how much more intricately entwined Wales is with the UK.

Even if these negotiations were simpler than anyone can imagine (they won’t be), it still seems likely it would be at the very least half a decade before Wales actually left (and there are strong arguments for a very long transition period). So, it will be 2037 before Wales can even begin rejoining. This process could take a very long time itself. By then, the EU will look entirely different. This of course ignores all the additional arguments around sovereignty and democratic deficit.

This is not to say that there are not legitimate reasons to campaign for independence, I am just saying that if EU membership is your main motivation, I think you may need to reassess.

Who should Wales look to for inspiration in how they have secured independence?

Succession is not a weird thing, though it is almost unheard of in well-established stable democracies. There are lots of examples of countries that have ‘gone it alone’. However, I actually think that looking too much to other countries for inspiration is counterproductive. Wales needs to become more self-assured and take proactive decisions on its future whether it is part of the union or not. Looking for others to show us the way is, in my view, counter-intuitive.

I think the example of Quebec is useful, however. Here you have a place which is part of a wider union, who had real concerns about losing identity and language. They were incredibly close to voting to leave in their second referendum. However, after concerns were listened to and addressed, they are now at a point where independence is not really being discussed. This shows that indy is not inevitable if real reforms are made – it is just whether Westminster as it is currently set up could make those changes.

What is your favourite Welsh phrase?

I also like ‘Haw dywedyd “mynydd” na myned drosto,’ which means ‘It is easier to say “mountain” than to climb one.’

As King Charles III visits Wales today some will be happy, others less so, perceiving him as a stumbling block on the road to independence.

Yes Wales could become independent, but should it?

@WillHayCardiff on our latest episode of Biteback Chats Books: pic.twitter.com/bHHri1YlG9

For more books on Independence