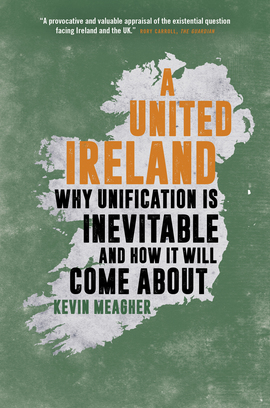 For over two centuries, the ‘Irish question’ has dogged UK politics. Though the Good Friday Agreement carved a fragile peace from the bloodshed of the Troubles, the Brexit process has shown a largely uncomprehending British audience just how uneasy that peace always was – and thrown new light on Northern Ireland’s uncertain constitutional status.

Remote from the British mainland in its politics, economy and cultural attitudes, Northern Ireland is, in effect, in an antechamber, its place within the UK conditional on the border poll guaranteed by the peace process.

As shifting demographic trends erode the once-dominant Protestant–Unionist majority, making a future referendum a racing certainty, the reunification of Ireland becomes a question not of if but when – and how.

In this new, fully updated edition of A United Ireland, Kevin Meagher argues that a reasoned, pragmatic discussion about Britain’s relationship with its nearest neighbour is now long overdue, and questions that have remained unasked (and perhaps unthought) must now be answered.

“The conversation on constitutional change in Ireland is moving into a much more focused new phase. Preparations have commenced, with the expectation that there will be a managed transition to new arrangements. Perhaps sooner than many imagine. This book is a welcome and significant contribution to the debate about a united Ireland, from an author who spotted where trends were leading some time ago.”

“A provocative and valuable appraisal of the existential question facing Ireland and the UK. Not everyone will agree with Meagher’s answers but this thoughtful book provides a roadmap to what may lie ahead.”

“A well-researched and timely contribution given the seismic changes shaping Irish politics and society. Whatever one’s political position, Meagher sets out key considerations for all sides of a debate that will ultimately require persuasion.”

“Provocative, persuasive and one of the biggest Brexit stories you’ve yet to read about in the mainstream British media.”