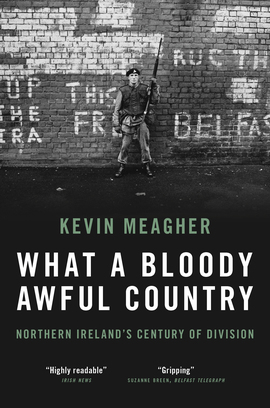 What a Bloody Awful Country Northern Ireland’s century of division

“For God’s sake, bring me a large Scotch. What a bloody awful country!” Home Secretary Reginald Maudling, returning from his first visit to Northern Ireland in 1970

As a long and bloody guerrilla war staggered to a close on the island of Ireland, Britain beat a retreat from all but a small portion of the country – and thus, in 1921, Northern Ireland was born.

That partition, says Kevin Meagher, has been an unmitigated disaster for Nationalists and Unionists alike. Following the fraught history of British rule in Ireland, a better future was there for the taking but was lost amid political paralysis, while the resulting fifty years of devolution succeeded only in creating a brooding sectarian stalemate that exploded into the Troubles.

In a stark but reasoned critique, Meagher traces the landmark events in Northern Ireland’s century of existence, exploring the missed signals, the turning points, the principled decisions that should have been taken, as well as the raw realpolitik of how Northern Ireland has been governed over the past 100 years.

Thoughtful and sometimes provocative, What a Bloody Awful Country reflects on how both Loyalists and Republicans might have played their cards differently and, ultimately, how the actions of successive British governments have amounted to a masterclass in failed statecraft.

“A gripping appraisal of Northern Ireland’s turbulent first century. Essential reading for anyone who wants to understand how we have got to where we are today.”

“A timely and lucid analysis of the Troubles that asks hard questions of successive British governments. The good news for the current government is that it also offers some answers.”

“Highly recommend What a Bloody Awful Country ... This month the province marks its centenary with little to celebrate: maybe Boris Johnson and Brandon Lewis should read this book.”