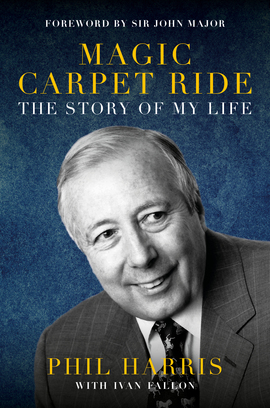 From humble beginnings in wartime Peckham, where his first memories are of being carried down into the air-raid shelter by his mother, Phil Harris would go on to transform his father’s market stall into Britain’s biggest carpet retail chain, himself becoming one of the richest people in the country, a member of the House of Lords and a passionate supporter of charitable causes.

An extraordinary retailer, largely instinctive with an exceptional feel for what the customer wanted, Harris and his astonishing business career, both its ups and downs, are the central themes to the book, though he is perhaps as well known today for his charitable work.

Severely dyslexic himself, with Tony Blair’s personal support, Lord Harris created the first academy school in London. There are now thirty-five Harris Academy schools, the latest one in Westminster, and it was David Cameron’s relationship with Lord Harris that persuaded the former PM to espouse the academy school so enthusiastically.

These, then, are the fascinating memoirs of one of the country’s greatest entrepreneurs and philanthropists.