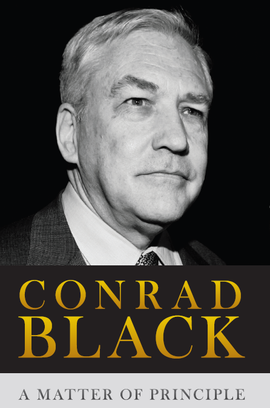 A Matter of Principle

In 1993, Conrad Black was the proprietor of London’s Daily Telegraph and the head of one of the world’s largest newspaper groups. In 2004, however, he was accused of fraud and fired as chairman of Hollinger.
In A Matter of Principle, Black describes his indictment, four-month trial, partial conviction, imprisonment and largely successful appeal. Black writes without reserve about the prosecutors who mounted a campaign to destroy him and the journalists who presumed he was guilty. Fascinating people fill these pages, from prime ministers and presidents to the social, legal and media elite. Woven throughout are Black’s views on big themes: politics, corporate governance and the US justice system. He is candid about highly personal subjects, including his friendships, his faith and his marriage to Barbara Amiel. Above all, Black maintains his innocence and recounts what he describes as the ‘fight of and for my life’. A Matter of Principle is a riveting memoir and a scathing account of a flawed justice system.

Witty, perceptive and a great read...