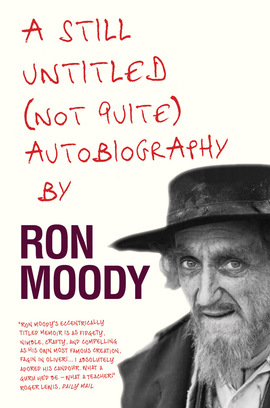 A Still Untitled (Not Quite) Autobiography

Actor Ron Moody has enthralled generations with his masterly performance as Fagin in both the stage and film versions of Oliver! – one of the great classics of British theatre and cinema. Planning to become an academic, he first took to the boards when a student at the London School of Economics – writing and performing in student revues. But his comedic talent and ability to create a string of eccentric and original characters quickly caught the attention of West End producers, who recognised his very special skills. Invited to appear, and later star in a string of highly successful revues, the course of his life was changed for ever. In this highly original and idiosyncratic memoir he looks back on those early days, describing in frank and fascinating detail the twists and turns of his career, the people he met and worked with, and the performances that led up to Oliver! In charting the course of his early career, Ron casts an ever-analytical eye over his many shows, giving piercing insights into the hard work and attention to detail involved in creating characters, the role of anarchy and clowning in his performances, and the nature of comedy itself. He also reveals the conflicts and clashes that can occur – both on and off stage – even in a show as successful as Oliver!, the tensions themselves often stimulating the actors to compete and create something memorable – as happened with Oliver!, and as he recalls in this truly original book.

Ron Moody's eccentrically titled memoir is as fidgety, nimble, crafty and compelling as his own most famous creation...