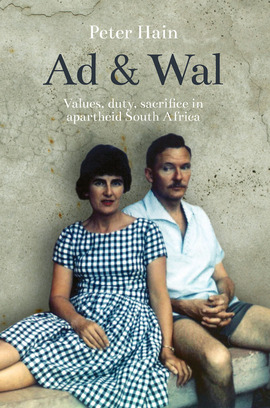 Most of us like to think we’d stand up to fight against evil, and yet the vast majority of white South Africans either stood by and said nothing or actively participated in the oppression and carnage during apartheid.
Ad & Wal is the story of two modest people who became notorious, two survivors who did what they thought was right, two parents who rebelled against the apartheid regime knowing they were putting themselves and their family in grave danger. Ad & Wal is the story of an ordinary couple who did extraordinary things despite the odds.

How did they come to their decision? What exactly did they do? What can we learn from them? Peter Hain, MP and former Cabinet minister, tells the story of his parents – campaigners, fighters, exiles – in this searing and inspiring account.

Blog: The Book Launch for Ad and Wal

The cover of Peter Hain’s biography of his parents, Adelaine and Walter, shows a couple who appear utterly typical English-speaking white South Africans of the 1950s…yet somehow they lacked the willful blindness of all but a handful of their peers to the injustice on which their privilege rested.

There is much to like about this book and its stories of resistance among the white South African community, both in South Africa and in exile...a particularly interesting first-hand insight into the UK’s vibrant anti-apartheid movement.

[A] powerful tale of a couple who fought to make the world a better place.

[T]his is a beguiling book that casts a light not just on the politics of the time but on human motivation… It is the small acts of cruelty and kindness that make this narrative so captivating.

Ad and Wal has the strong dramatic structure of a novel… Hain writes in a fluid and unadorned style… He has a good eye for telling details… This is a very personal story, as much a love story as one of protest and politics.

A revealing story about a couple who lived under the ugliest of regimes and were shocked by repression and injustice, galvanised by their own humanity to speak out.

He (Hain) makes their day-to-day struggles much more personal than anything I recall hearing or reading myself.

This book is a fascinating inside account of some of the key events and players of the apartheid years.

Hain, a former Labour Cabinet Minister, gives himself a minimal role in the book, referring to himself in the third person and giving all the credit to his extraordinary, ordinary parents.