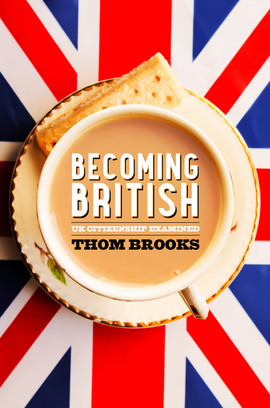 From Syrian asylum seekers to super-rich foreign investors, immigration is one of the most controversial issues facing Britain today. Politicians kick the subject from one election to the next with energetic but ineffectual promises to ‘crack down’, while newspaper editors plaster it across front pages.

But few know the truth behind the headlines; indeed, the almost daily changes to our complex immigration laws pile up so quickly that even the officials in charge struggle to keep up.

In this clear, concise guide, Thom Brooks, one of the UK’s leading experts on British citizenship – and a newly initiated British citizen himself – deftly navigates the perennially thorny path, exploding myths and exposing absurdities along the way. Ranging from how to test for ‘Britishness’ to how to tackle EU ‘free movement’, Becoming British explores how UK immigration really works – and sparks a long-overdue debate about how it should work.

Combining expert analysis with a blistering critique of the failings of successive governments, this is the definitive guide to one of the most hotly disputed issues in the UK today. Wherever you stand on the immigration debate, Brooks’s wryly observed account is the essential roadmap.

“Many say that we need to talk about immigration. Yes, we do. Thom Brooks in his book provides an overarching account of what many feel as Britishness. It is a very important read as it shows how difficult it is to come to terms with this.”