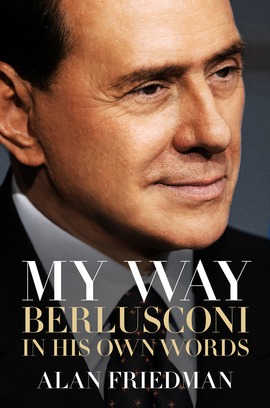 My Way Berlusconi In His Own Words

From cruise-ship crooner to real-estate tycoon, billionaire media mogul to the longest-serving and most controversial Prime Minister Italy has ever known, Silvio Berlusconi’s life has been nothing less than a whirlwind of epic transformations.

A self-made hero of the people to some, while a sex-crazed, interest-driven opportunist to others, this polarising figure evokes strong reactions from both sides of the political spectrum – adored and despised in equal measure by the Italian electorate, and seen as something of an enigma by the rest of the world.

Through the course of more than hours of exclusive conversations with award-winning journalist Alan Friedman, Silvio Berlusconi speaks candidly about everything from football to front-page scandals, politics to his now infamous ‘Bunga-Bunga’ parties, relayed here alongside interviews with both friends and foes, long-serving colleagues and highprofile political rivals.

Featuring revelations about Berlusconi’s most private moments, his successes and failures with world leaders such as Vladimir Putin, George W. Bush, Colonel Gadda and Tony Blair, as well as the truth behind his supposed Mafia connections, My Way reveals the unvarnished version of events of what is, by all accounts, a truly extraordinary life story.

"An entertaining and insightful portrait of the billionaire playboy politician who dominated Italian politics for two decades. Alan Friedman has once again written a timely and controversial book."