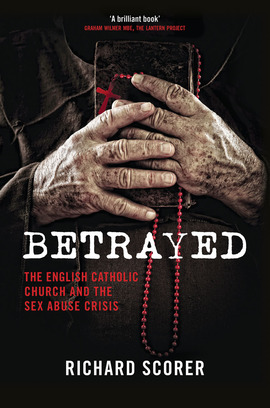 Betrayed The English Catholic Church and the sex abuse crisis

‘How much filth is there in the Church, even among those who, in the priesthood, should belong entirely to God.’ Pope Benedict XVI’s lament at a Good Friday Mass in 2005

Over recent decades, a sex abuse scandal has engulfed the worldwide Catholic Church. Today, there remains a view that, amid the global furore, there were relatively few cases in England and that the Catholic Church here rapidly put its house in order.

Richard Scorer begs to differ. The patterns of abuse, denial, institutional complicity and cover-up that defined the scandal in Ireland, the USA and elsewhere have been present here too: they have been remarkably consistent throughout the Catholic Church in every part of the world.

This compelling book, from an expert in the field, is both a devastating exposé of past misdeeds and a vital call to arms in the fight to ensure that the sins of the Fathers are not visited on a new generation.

[Scorer] has written Betrayal in clear, luminous prose, telling us only what he has heard and seen. The result is compulsive reading.

His book is exhaustively researched, beautifully written, passionate yet objective, and a major contribution to the literature on this heart-breaking subject.

Scorer is very balanced … it is very good and we should be grateful to Scorer for sharing his experience.