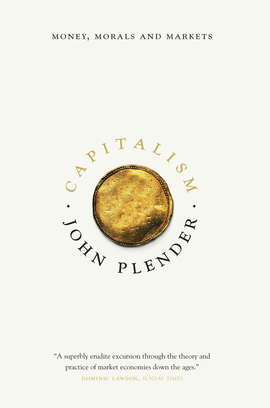 Capitalism has lifted millions out of poverty, transforming living standards and creating prosperity on a breathtaking scale. And yet, capitalism is unloved. Voices compete to point out the flaws in the system that allow increasingly powerful elites to grab an ever larger share of our collective wealth.

In this incisive, clear-sighted guide, award-winning Financial Times journalist John Plender explores the paradoxes and pitfalls inherent in this extraordinarily dynamic mechanism – and in our attitudes to it. Taking us on a journey from the Venetian merchants of the Renaissance to the gleaming temples of commerce in 21st-century Canary Wharf, Plender shows us our economic creation through the eyes of philosophers, novelists, poets, artists and divines.

Along the way, he delves into the ethics of debt; reveals the truth about the unashamedly materialistic artistic giants who pioneered copyrighting; and traces the path of our instinctive conviction that entrepreneurs are greedy, unethical opportunists, while manufacturing is innately virtuous.

Thoughtful, eloquent and above all compelling, Capitalism is a remarkable contribution to the enduring debate.

'It [Capitalism] does a better job of bringing together all the key issues facing today’s global economy than any other book I’ve read... a delight to read.'

'A superbly erudite excursion through the theory and practice of market economies down the ages.'

‘In this thoughtful and stimulating intervention, John Plender [...] offers a tour d’horizon of the debate, enlivened by a deep knowledge of the global economy and an interest in history, together with an open-minded willingness to place capitalism on the scales of justice and see which way they tip.’

'John Plender is one of capitalism's more thoughtful observers. His erudition and lifelong curiosity come together beautifully in this wise and wide-ranging book.'

'Plender is neither dogmatic nor prescriptive; if you like to read something that furnishes ideas for debate, then this book is for you.'

'[John Plender] approaches the quandaries of capitalism with a shrewd eye for detail.'

The Good, the Bad and the Greedy
The New Snobbery
Greater
The Corruption of Capitalism