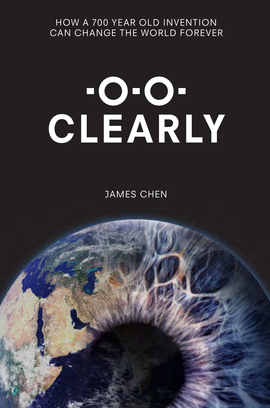 Poor vision is the largest unaddressed disability in the world today. An estimated 2.5 billion people, a third of the global population, suffer from poor vision because they don’t have access to a simple pair of glasses - a solution that has been around for centuries. It is an issue the world has ignored, even though tackling it would transform countless lives - helping children to learn, improving gender equality, increasing productivity, and ultimately reducing poverty.

The world is on the cusp of a new technological revolution but those without good sight cannot participate in this progress and will fall further behind. Insufficient funds are available to tackle the issue yet helping the whole world see would save trillions of dollars in health costs and lost productivity. In this extraordinary book, businessman and philanthropist James Chen asks why this should be, and describes his quest to answer that question.

In Clearly, he reveals the personal stories of some of those afflicted and identifies the barriers to universal access to vision correction. He delivers a passionate call to governments and international institutions to act and appeals to the worlds of business, technology and medicine to come together and find a solution to this global problem.

Clearly performs an important service in bringing the issue of poor vision to the world’s attention. The Clearly campaign, and this book, vividly shows us the cost, in human and economic terms, of so many of our fellow citizens being unable to see. New technology offers millions of the world’s visually impaired ways to see and to turn text into audio. It is time for the world to act fast. If we fail to act, those left behind will never catch up.

I am excited to endorse Clearly both in my role as CEO of Sightsavers and personally as someone whose extreme short-sightedness was discovered at a school screening programme when I was six. Sightsavers is dedicated to fighting avoidable visual impairment in developing countries, whether that be through strengthening eye health systems or ensuring people are able to access eye tests and spectacles.

The issue has not had the attention it deserves – poor eyesight makes it more difficult to get a good education, hampers job opportunities and therefore damages economies. It also means people miss out on beautiful sights – a sunrise, their grandchildren – things beyond price. So I welcome James Chen’s involvement wholeheartedly.

With his Clearly campaign and this excellent book, James Chen has shone a light on an issue the world must now address. Too many of our fellow citizens suffer from poor vision for no other reason than they have never had access to an eye test and glasses. The cost in personal and economic terms is enormous. Good sight is the key to achieving many of our development goals.

With his wonderful Vision for a Nation organisation in Rwanda, in cooperation with the Ministry of Health, James has shown a visionary way forward. Governments across the developing world should follow their example. This is an important book. Health and economic ministers everywhere no longer have an excuse for ignoring the problem of correctable poor vision.

I admire James Chen’s mission to help the billions of people on our planet with poor vision. In a world where we have made unprecedented progress, it is unforgivable that so many still struggle to see clearly. The time for the whole world to see has come.

Helle Thorning-Schmidt, CEO of Save the Children International, former Prime Minister of Denmark

Right now, life as we know it is being disrupted by a technological revolution. Yet 2.5 billion people are being left out of benefiting from progress because they lack something so basic – a pair of glasses.

Through his work with Clearly, James Chen reveals the mind-boggling problem of a world where inventions from drones and 3D printing to virtual reality are becoming commonplace, but we haven’t found a way to put a pair of glasses on the noses of everyone with poor eyesight.

His mission to bring pioneering entrepreneurs and new technology together, to mobilise this old invention for the good of everyone, is as uplifting as it is innovative. A true visionary.

In Clearly, philanthropist James Chen highlights a global problem too long neglected: the 2.5 billion people worldwide who cannot see clearly, but for whom a simple pair of glasses is beyond their reach. With one-third of the global population affected, poor vision may be the largest unaddressed disability in the world today.

Poor vision is a barrier to progress on so many levels, hindering education, employment opportunities and productivity. Chen presents the barriers people face in the developing world to acquiring glasses – a 700-year-old invention – as well as ready solutions to eliminate these barriers. It is a must-read for any policy maker who is serious about education, poverty reduction, closing the equity gap and achieving the 2030 development goals. In health costs and lost productivity alone, poor vision carries a global cost of trillions of dollars per year.

This book is just what we need to kickstart action and drive the change needed – to work together so no one is left behind for lack of a pair of glasses.

James Chen is living proof that often the greatest progress for humanity can come from personal setback for one human being. From a failed eye test when he applied for a driving permit was born Chen’s lifelong obsession to help the whole world see.

With 2.5 billion people unable to see properly, and unable to get basic eye care, Chen and his Clearly campaign are leaders in highlighting the greatest unmet disability of our times. They have shown, in Rwanda, how this problem can be fixed. And now he is determined to fix it for the world. This is a compelling story, well told, of that rare thing in the world – someone with a really bold vision who has the resources, the determination and the inspiration to make it happen.

Chen and his Clearly campaign recognise that health is a human right and have addressed the problem of poor vision in Rwanda by supporting the Ministry of Health to integrate eye care in the primary health system. Together, we have shown that good eye care does not just improve general wellness, but also has a fantastic economic return for individuals, families, local communities, and the entire country.

Chen’s new mission is to improve eye-care services for the entire world. This is the compelling story of how one man with a bold vision and an unwavering passion invested his resources to make his dreams a reality.

As a lifetime wearer of specs, I was shocked to learn that a third of the world’s population cannot see properly purely because they have never had access to an eye test and the glasses they need to go about their daily lives. As James rightly says, it is unacceptable and it is a scandal that the world must address. The economics are a no-brainer. Helping people see will increase the world’s productivity and boost the learning of young people.

More important than that, it will make a huge difference to the quality of life of the 2.5 billion people who just need a pair of glasses. This book is a wake-up call. I hope it inspires the people who have the power to make things right to do just that.

James Chen is a true visionary whose Clearly campaign and this totally excellent book has done an enormous service to the world.