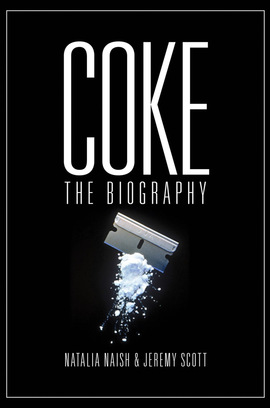 By Jeremy Scott and Natalia Naish

‘Cocaine’s not addictive, darling. I should know, I’ve been taking it for years.’

That airy disclaimer, uttered by Tallulah Bankhead, has long been an article of faith for coke’s legion of fans – and little has changed since cocaine’s sensational debut in the Belle Epoque. Alternately glorified and demonised, hailed as a miraculous cure-all or blamed for society’s failings, the White Lady has gone global. Today, she is the stimulant of choice for European partiers and stressed-out bankers alike – and everyone from producer to consumer is playing a high-stakes game.

In Coke, Natalia Naish and Jeremy Scott recount the sweeping history of cocaine since its first appearance, charting the highs and lows from pre-history to the present day. With personality-led stories of its more notorious users, including Sigmund Freud, Stevie Nicks, Kate Moss and Amy Winehouse, the tale is rich in anecdote, often tragic and sometimes hilarious.

Neither moralistic nor condoning, Coke: The Biography is a thrilling popular history of a global phenomenon.

Friend and killer to the stars, Charlie’s finally got a biography all of its own...

Michael Prodger, The Mail on Sunday