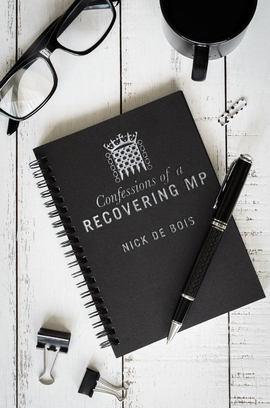 Confessions of A Recovering MP

You are not an executive who can make and enforce decisions. You are a legislator who votes on making laws.

You are not a counsellor, a housing officer, benefits clerk, bank or trading standards officer, but you are often expected to provide a new home, sort out benefits, provide a loan or settle a dispute about a computer game bought for little Jimmy that doesn't work.

You are, in fact, a 21st century Member of Parliament representing about 125,000 good folk from your constituency by taking your seat in probably the finest parliament in the world (despite what you may read or hear in the media).

You are elected by a simple majority from roughly 50,000 people who mark their ‘X’ by your name at a general election, hoping that you will be able to make a difference somehow.

Then, when as a new MP, you walk through the Members Lobby filled with a vision of how you will leave your mark on this place and this nation, what you are almost certainly unaware of is that your constituents, your government, the press and the very institution of the Palace of Westminster have other plans for you.

So it was for Nick de Bois in May 2010 when, with an unimpressive and insecure majority of 1,682, he began the journey of a life time, meeting head-on the bizarre, the inexplicable, the touching, the shocking, the vitally important and, thank god, lots of utter nonsense as well.

I’ve been there – it’s all true. And Nick de Bois tells it like it is quite brilliantly.

Confessions of a Recovering MP is excellent: mixing humour, reminiscence, modesty, insight and good story telling. It is well written and adopts a pacey and fluent style … This is a fun and compelling read – and the candidate’s departments of all political parties should issue a copy to everyone who says they would like to be an MP.

Nick de Bois is a superb campaigner and knows politics inside out. This book is a must-read!

Nick de Bois has a cocky style, a fund of good stories and a fresh perspective on a messy but noble job. I wish I’d read a book like this before I started.

An MP has a wonderful but unusual life which Nick explains with grace and humour.

Confessions of a Recovering MP had me crying with laughter.