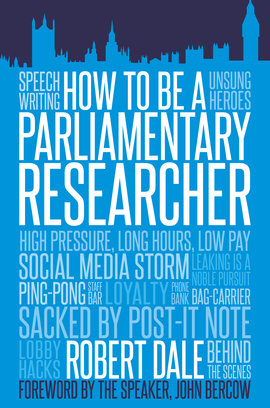 How to Be a Parliamentary Researcher

With a foreword by the Speaker, John Bercow

To some, they are the graduates grasping the first rung on the ladder to power, to others, the unsung heroes of the British parliamentary system. But whether your notion of parliamentary researchers is more The Thick of It than The West Wing, more Yes Minister than House of Cards, there is no doubt that these individuals play an essential role in keeping the giant (and, let’s be honest, slightly creaky) machine that drives British politics from juddering to a halt.

Branded bag-carriers while actually performing vital duties like drafting speeches and Parliamentary Questions, handling the media and engaging with constituents online, parliamentary researchers do the dirty work behind the scenes, allowing their bosses to focus on their main job – performing.

With the help of case studies and guest writers, Robert Dale, himself a former parliamentary researcher, tells the fascinating story of how the MP’s office has developed over recent decades, and combines practical advice with acute personal observations on how to get ahead as a researcher.

If you’re a graduate looking to take your first step into politics, or simply interested in the job around a third of our current Cabinet had before becoming an MP, How to Be a Parliamentary Researcher offers a compelling insight into how the British political system really operates.

'This book is filled with the theoretical and practical guidance necessary to help demystify Parliament and make it more accessible to anyone who aspires to work at the heart of our vibrant democracy.'

'A great resource for anyone beginning their career at the heart of British politics.'