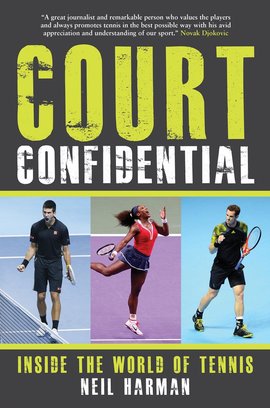 Court Confidential Inside The World Of Tennis

Tennis has never before been blessed with such an array of talented stars doing battle for the sport’s most coveted titles. Games featuring Murray, Nadal, Federer, Djokovic, the Williams sisters and Maria Sharapova are among the most thrilling matches in the history of the game – and Neil Harman has witnessed them all. He is so close to the beating heart of tennis that he has become a confidant to many of the game’s stars and administrators, even at one stage mentoring Victoria Azarenka to help her handle the media pressure at the top of the women’s game. In short, Neil enjoys a privileged access that is unmatched elsewhere in the sport.

Here he shares tennis’s most intimate secrets in a book replete with personality, excitement, drama and intrigue. Featuring frank, in-depth interviews with all the leading players, their coaching staff, their agents and managers, Harman presents the game from an insider’s perspective and offers the fresh insights and strong personal views for which he is celebrated. Court Confidential recounts a defining time for modern-day tennis: from Wimbledon to the Olympic Games, from Serena Williams’s battle with illness to Andy Murray’s historic grand slam victory, this is a book for tennis fans everywhere.