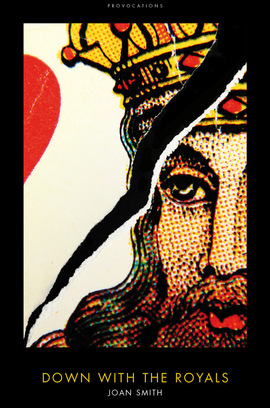 Down with the Royals Provocations Series

When Prince George was just eight weeks old, the Evening Standard declared him to be ‘the most influential person in London’. He couldn’t even walk, let alone talk. Yet one day he could become head of state, whether we like it or not.

Joan Smith argues that it has become nearly impossible to question the existence of the monarchy. Articulate republicans are drowned out while the supercharged PR and media machines ask only who designed Kate’s dresses.

Smith topples the arguments for having a monarchy, one by one. The royals don’t provide a boost for tourism, and their deliberately opaque accounting conceals the truth about the huge burden they place on the public purse.

And she exposes darker truths. These symbols of so-called impartiality have hidden power and influence. Not only does Charles regularly lobby government ministers but – far from the sycophantic reporting of Kate’s baby bump – the royals have dined with despots with blood on their hands. Are these people really fit to be the public face of a modern country?

Ultimately, Smith declares that the monarchy – undemocratic, unaccountable and shockingly expensive – has no place in modern Britain.