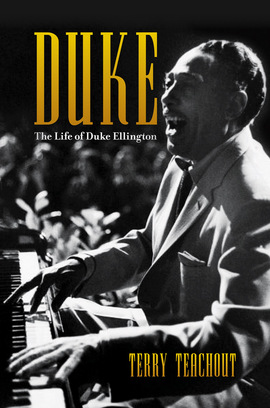 Duke A Life of Duke Ellington

Edward Kennedy ‘Duke’ Ellington was arguably the greatest jazz composer of the twentieth century—and an impenetrably enigmatic personality whom no one, not even his closest friends, claimed to understand. His music, too, was powerful and entirely original. Andre Prévin compared him to Stravinsky and Prokofiev, Percy Grainger to Bach and Delius.

But in fact he was very much his own man. The grandson of a slave, Ellington dropped out of high school to become a musical showman of incomparable suavity, as comfortable in Carnegie Hall as in the nightclubs where he honed his famous style. When he raised his fingers, the music that blazed out had its own unique richness and range.

He wrote hundreds of compositions, many of which remain beloved standards, and sought inspiration in an endless string of transient lovers, concealing himself behind a smiling mask of flowery language and ironic charm. In this revealing biography, Terry Teachout skillfully peels away the countless layers of Ellington’s evasion to tell the unvarnished truth about a creative genius and musical pioneer.

‘Reviewers appreciate his ability to convey the power of Ellington’s music… Teachout both ‘clearly elucidates Ellington’s mastery as a composer’ and also provides an ‘impressively lucid, compact narrative.'

Mr Teachout adroitly chronicles how Ellington coaxed from his ensemble such timeless hits as “Mood Indigo”. And he adeptly evokes the personalities of the ducal band.

Terry Teachout […] chronicles this life in meticulous detail… probably gets as close to the Duke as we’ll ever get.

This impeccably written and researched tome gives us vivid glimpses of the real man behind the mask.

There are dozens of books about Ellington, this is among the most remarkable.

He keeps his psychoanalysis within safe limits; he contextualises historically without sounding contrived, and honours his subject’s musical achievements through just the right amount of close analysis.