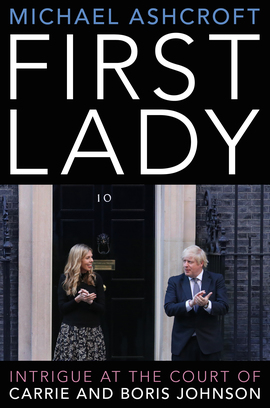 First Lady Intrigue at the Court of Carrie and Boris Johnson

“Ashcroft does marshal enough evidence to suggest that Carrie Johnson is meddlesome and attention-seeking, a ... cross-breed of Kate Middleton and Meghan Markle.” New Statesman

“Most readers are now familiar with the story of the power struggle inside Downing Street ... Ashcroft helpfully traces these tensions back to their original roots, well before [Carrie Johnson] entered No 10.” Gaby Hinsliff, The Observer

“[The] explosive book that has set Westminster alight.” Mail on Sunday

“The book is not the misogynist hatchet job that many reviews suggest and most readers will be able to discern that much of what is alleged is known to only those close to the events.” Maggie Pagano, Reaction

Carrie Johnson is not only the consort of the Prime Minister, Boris Johnson; she is also considered by some to be the second most powerful unelected woman in Britain after the Queen. Since she moved into Downing Street in July 2019, questions have been raised about her perceived influence, her apparent desire to control events, and the number of her associates who have been appointed to positions of standing in the government machine. So, are these concerns justified?

In this carefully researched unauthorised biography, Michael Ashcroft charts the extraordinary ascent of Mrs Johnson, speaking to multiple sources who have been close to her and to Boris Johnson in recent years to produce a fascinating portrait of a woman who is still under the age of thirty-five.

The book scrutinises Mrs Johnson’s colourful family, her attempt to become a professional actress, and her early decision to work in politics. Long before she moved into No. 10, Mrs Johnson made a name for herself as a Conservative Party press aide before becoming a special adviser to two Cabinet ministers and eventually director of communications at Conservative campaign headquarters. Aside from politics, she is also the mother of two young children and campaigns in the fields of the environment and animal welfare.

Carrie Johnson is without doubt a very modern prime ministerial spouse. This examination of her career and life offers the electorate the chance to assess exactly what role she plays in Boris Johnson’s unpredictable administration and why that matters.

“Well researched and insightful … By writing First Lady, Michael Ashcroft has done us a favour … This book tells us a lot about the way Britain under Boris Johnson is being run.”

“This book offers an account of where Carrie came from, what she wants, what makes her tick and, most important, the influence she has on our PM. There are too many sources for [it] to be dismissed as a hatchet job … There is plenty in this volume that deserves to be taken seriously.”

"This book presents [Carrie Johnson] as the prime ministerial spouse from hell."