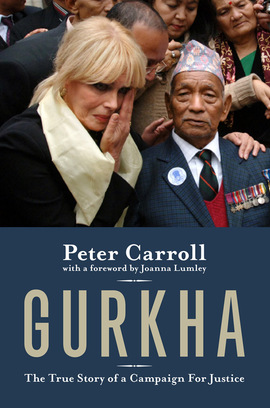 Gurkha The True Story of a Campaign for Justice

The course of a life can be altered by the smallest decisions; the most innocuous events can turn out to have the greatest of consequences. On a Sunday afternoon in 2004, local politician Peter Carroll invited four men into his Folkestone home and promised to help them fight for the right to settle in the country they had served. Five years later, the Gurkhas of Nepal welcomed Peter as a national hero. A losing election battle against the Conservatives in his constituency and a local protest to save village post offices were the only campaigning experience that Peter could bring to the table. But passion, belief and sheer good fortune were on his side. The Gurkha Justice campaign was like a storm. It started slowly, gathering strength over the ensuing months and years before finally building to a crescendo, bursting into the national consciousness and overturning the policy of Her Majesty’s Government in spectacular style. For anyone who has lost faith in human nature, Gurkha shows that when good people do good things, the incredible can be achieved. Too many people think that democracy and politics can’t deliver, but here is one shining example of our country and its institutions at their very best.