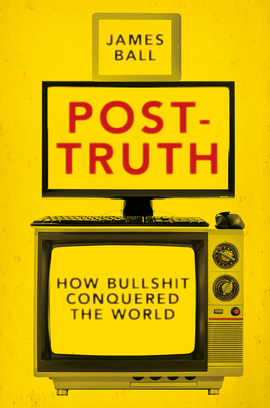 Post-Truth How Bullshit Conquered the World

2016 marked the birth of the post-truth era. Sophistry and spin have coloured politics since the dawn of time, but two shock events – the Brexit vote and Donald Trump’s elevation to US President – heralded a departure into murkier territory.

From Trump denying video evidence of his own words, to the infamous Leave claims of £350 million for the NHS, politics has rarely seen so many stretching the truth with such impunity.

Bullshit gets you noticed. Bullshit makes you rich. Bullshit can even pave your way to the Oval Office.

This is bigger than fake news and bigger than social media. It’s about the slow rise of a political, media and online infrastructure that has devalued truth.

This is the story of bullshit: what’s being spread, who’s spreading it, why it works – and what we can do to tackle it.

Both Evan Davis and Matthew d’Ancona recently published excellent books on our so-called post-truth era, but I’d like to highlight James Ball’s Post-Truth: How Bullshit Conquered the World for its vivid analysis of how the business models and incentives currently prevailing in digital media render decent discourse all but inaudible.

“A timely and important book by one of the smartest of the new generation of journalists and thinkers.”

“In the era of Trump, bullshit is spreading like a pandemic. In Post-Truth, Ball has put on his Hazmat suit, waded into the most infected areas of the world, and found a way to stop the plague.”

“Fake news, post-truth and propaganda are all symptoms of a news ecosystem and political culture that incentivises clickbait and confrontation. There has never been a time when it was easier to spread stories that were untrue, and never a more important time to be able to sort the facts from the bullshit. James Ball has produced a timely and thoroughly readable guide to how to navigate a sea of falsehoods through a storm of hyperbole, bias and propaganda.”

Emily Bell, director of the Tow Center for Digital Journalism at Columbia University

“James Ball’s analysis of all this is careful, methodical and thoughtful... It’s a compelling look at what we like to think of as a modern phenomenon.”

“Better than anyone I know, Ball explains how the economics of the web is destroying the possibility of financing serious news and raising the question ​of ​whether readers want a cautious fact-checked article when it is cheaper and much more profitable to follow Breitbart, the Express or the Canary and whack out clickbait, which is anything but ‘boorring’.”

“A crisp, highly informative introduction to what ails the information industry and what can be done about it … Ball’s analysis of where the media have gone wrong is thorough and courageously even-handed.”

“Worth reading for [its] dissection of one of the more annoying and insistent mosquitoes of our social and media lives.”