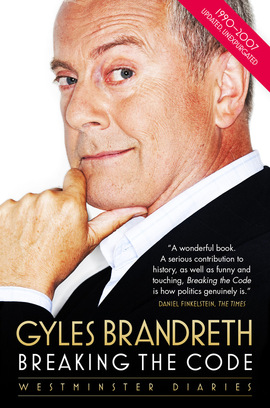 A surprise win for the Conservatives as the voters decisively reject a Labour leader deemed ‘not Prime Minister material’? A Tory Party ripped apart by European civil war? A country rebounding from one of the worst recessions in living memory?

One of the winners in an election victory nobody had predicted, back in 1992, Gyles Brandreth is no stranger to a poll-confounding, knife-edge Tory majority. Controversially, his gloriously indiscreet diaries revealed for the first time the secret world of the Government Whips’ Office and its struggles to control a party riven by in-fighting over Europe.

Now, as history looks set to repeat itself, comes the definitive edition of this widely acclaimed classic, featuring material originally excised for legal reasons, as well as additional diaries taking the story on another ten years.

With candid descriptions of the key figures of the era, from the leading players to the ministers who fell from grace – and a bright young hopeful by the name of David Cameron – Breaking the Code paints an extraordinary portrait of Whitehall and Westminster in our time – warts and all.

'A serious contribution to history as well as funny and touching. Breaking the Code is how politics genuinely is.'

Brandreth is the true Samuel Pepys of our day.

Brandreth, for my money, offers about the most honest, and the most amusing, account of the demented, beery futility of the Tory-ruled Commons in the 1990s.

As a witty and insightful chronicler … Brandreth is unsurpassed.