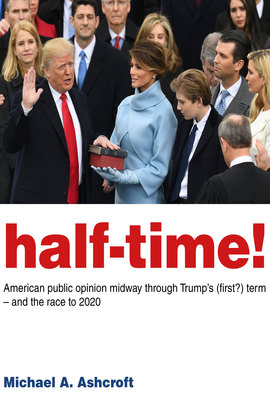 Half-Time! American public opinion midway through Trump’s (first?) term – and the race to 2020

The start of 2019 is midway between the last presidential inauguration and the next – but will it also prove the halfway point in Donald Trump’s presidency?

Following up Hopes and Fears, which set out in compelling detail why America sent Trump to the White House, Half-Time! brings together two years of groundbreaking research, exploring what the voters make of the President’s agenda and character, how they see the issues at stake and – with voices at the far ends of the political spectrum set to dominate the debate – how they are lining up for the 2020 election.