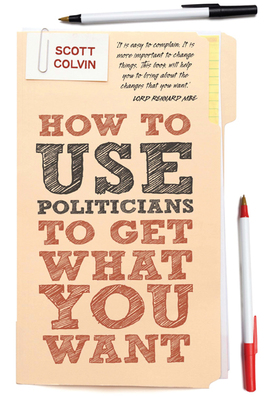 How to Use Politicians to Get What You Want

Winner of the Atticus Award

Ever since the 2009 expenses scandal erupted, public opinion of politicians has hit rock bottom. Even with a new intake into Parliament, people are still asking, what is the point of having an MP?

However, most people do not realise that politicians can be used to help them get what they want in a range of situations in everyday life. Scott Colvin has spent the past ten years working in national and local politics. During that time he has worked out how to use politicians to win a range of personal battles, both as a consumer and in his community. All of the battles he has won – including getting the chief executive of a FTSE-25 company to personally intervene to send an engineer to his home, saving the last post office in his town, campaigning for his child’s nursery to remain open and getting a wheel clamper to remove a clamp free of charge – have been achieved by using MPs and councillors either passively or actively to support his campaigns. He believes that everyone could do the same if only they knew how.

This book is an informal ‘how-to’ guide for consumers, pressure groups, residents groups and others to demonstrate how and when to use your national and local politicians to assert your rights as both a consumer and a citizen. Politicians are often seen to have played the system for their own financial and personal gain; it is time for the people they represent to get the same chance.

Simple, clean, instructive, and without any preaching