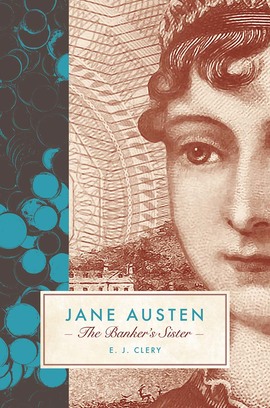 When it was announced that Jane Austen would appear on the new £10 note in 2017, few were aware that a £10 Austen banknote already existed – issued by her favourite brother. Handsome, clever and enterprising, Henry Austen founded a bank business and charmed his way into the top rank of aristocratic society before going spectacularly bust in the financial crash of 1816. He left an enduring legacy, however, for it was Henry who supported Jane’s dream of becoming a published author.

Literary critic and cultural historian E. J. Clery presents a radically new vision of the much-loved novelist, revealing how her works were shaped by an acute awareness of the economic scandals, crises and speculations that marked the Regency era.

Jane Austen: The Banker’s Sister provides a fascinating reappraisal of the political connections and economic interests of the Austen family, and an engaging exploration of the bond between brother and sister. It will change the way Jane Austen’s life and novels are understood.

"E. J. Clery’s calmly commanding Jane Austen: The Banker’s Sister makes some enlightening juxtapositions of material from the Austen family so as to suggest fresh things about the more familiar biographical arc of the author herself. A critic attuned to the practical pressures and the imaginative possibilities of economics in the period, Clery would be a perfect read for those who cannot understand why Austen should be on the £10."

"Jane Austen, The Banker's Sister held me enthralled [...] It's full of exciting new information about Jane Austen's banker brother Henry, and therefore Jane herself. The linking of brother and sister as optimistic, courageous, even speculative fellow-spirits offers new insights about the woman we thought we knew. Clery's genial, accessible, and original book is a must read."

"Considering how central a role economic considerations play in Jane Austen’s novels (and her life) I’m amazed that no one seems to have  written a book on this topic, until now. This work is a valuable and fascinating addition to what we know about Jane Austen."

"Clery’s masterful and scholarly interpretation of Austen’s family dynamics, political links, and financial successes and failures provides an interesting and fresh approach to the study of this illustrious novelist’s life and legacy."

Last Rights: The Case for Assisted Dying
Unfair Game
The Shark That Walks On Land
Pets By Royal Appointment