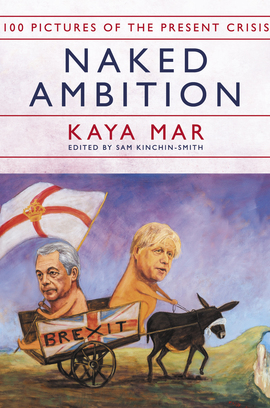 By Kaya Mar and Sam Kinchin-Smith

Attentive observers of the past ten years of British politics may not have heard of Kaya Mar, but chances are they will have seen one of his pictures – at a rally, or in an agency photograph syndicated around the world, or via a viral tweet. His paintings in oils are unlikely jewels of surreal satire, gleaming in the political desert in which we find ourselves: a kaleidoscopic gallery of the clowns, mountebanks and villains in charge, stripped of their self-importance and thrown overboard.

This selection of 100 pictures, edited and introduced by Sam Kinchin-Smith, tells several stories at the same time: of how we got into this mess, of how we might get out of it, and of how Mar has become one of our most perceptive and wildly inventive political artists. It is the first proper account of the work of a cult figure around Westminster, promoted by the present crises to the status of national treasure: a satirist laureate for Brexit Britain. And fortunately, considering what doubtless lies ahead, he’s only just getting started.

“Kaya Mar is a brilliant artist and caricaturist with an acute political eye. His work is both very funny and very serious. We laugh at the portraits of our so-called political leaders and then wince on recognising the central truth of what he is saying – that we are choosing our own decline and swimming through a self-inflicted, dreadful mess which our politicians make worse and worse.”

“Kaya Mar adds to the gaiety of politics with his brilliant caricatures and Swiftian satire. He is ever-present on the edge of big events at Westminster, working hard with his acid pens and paints.” Adam Boulton

“Kaya Mar can capture a person and a moment with a touch of genius. Part cartoon, part mimicry at the end of a brush, and part sheer impish devilment, his works are a unique treasure trove of political satire. Politicians beware!”

Have We All Gone Mad?
Independent Nation
The Secret Life of Special Advisers
Welcome to Britain: Fixing Our Broken Immigration System