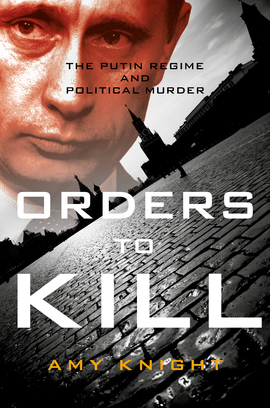 Orders To Kill The Putin Regime and Political Murder

Ever since Vladimir Putin came to power in Russia, his critics have turned up dead on a regular basis. According to Amy Knight, this is no coincidence. In Orders to Kill, the KGB scholar ties dozens of victims together to expose a campaign of political murder during Putin’s reign that even includes terrorist attacks such as the Boston Marathon bombing.

Russia is no stranger to political murder, from the tsars to the Soviets to the Putin regime, during which many journalists, activists and political opponents have been killed. Kremlin defenders like to say, “There is no proof,” however convenient these deaths have been for Putin, and, unsurprisingly, because he controls all investigations, Putin is never seen holding a smoking gun.

Orders to Kill is a story long hidden in plain sight with huge ramifications.

“[Knight’s] detailed indictment makes a strong case that Vladimir Putin and the criminal empire he created survives because dissidents are slain without any consequence … Mr. Trump has voiced disdain for reading books. Perhaps someone should slip a copy of Orders to Kill onto his nightstand.”

“Amy Knight is our foremost expert on Russian spycraft. This incisive, deeply researched account of the Kremlin’s murderous dark arts should be an electrifying wake-up call to the West about the danger we face from Putin’s gangster state.”

“A brave and important book. Amy Knight has an expert understanding of Russia, its spy agencies, and the dark state created by Vladimir Putin and his KGB cronies. Putin’s critics have an uncanny habit of falling dead and Knight tells this story with rare skill. Compelling.”

Luke Harding, author of A Very Expensive Poison: The Murder of Alexander Litvinenko and Russia’s War with the West