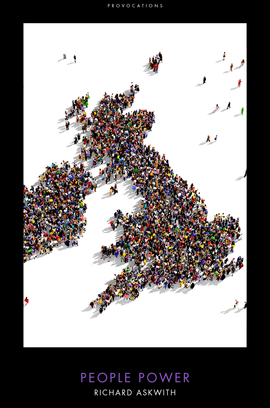 There’s a new force in politics. After years of involuntary silence, the people, wise or foolish, right or wrong, are demanding to be heard. Public opinion has become ‘the giant before which all tremble’, and representative democracy must adapt or die.

Millions have lost faith in the educated elite who traditionally manage their democratic mandate. Instead, increasingly, elected politicians are expected to bow to the directly expressed ‘will of the people’, no matter how ill-informed or manipulated. For the first time in centuries, the legitimacy of Parliament is in doubt.

In People Power, journalist Richard Askwith poses a radical but thrilling question: what if we were to remake our system of government to reflect the new world we live in?

This is the story of a chamber crying out to be abolished, a chamber crying out to be created, and a people who have reclaimed the right to govern themselves. It is the story of the threats posed by populism to our most precious liberties; and of how, by conceding a little to direct democracy, Parliament could secure its future and turn people power into a force for good.

The Press Freedom Myth
In Defence of Political Correctness
Bluffocracy
'I STILL Find That Offensive!'