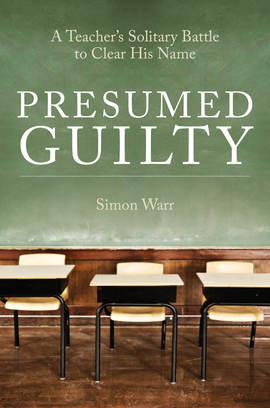 Presumed Guilty A teacher's solitary battle to clear his name

A respected boarding school teacher, described by his peers as ‘one of the outstanding schoolmasters of his generation’, Warr was arrested following an allegation of historical child abuse. The complainant was a former pupil at a school where Warr had taught over thirty years previously. Although horrified by the claim, Warr was confident that without conclusive evidence the case would be dropped immediately. Instead, he spent an agonising 672 days on bail, waiting first to be charged and then for the case to go to trial.

It took a jury less than forty minutes to acquit Warr unanimously on all charges. But despite being exonerated by the court, the damage to his reputation was irreversible. And while he struggled to cope in the devastating aftermath of the false accusations levelled against him, his complainants walked away with impunity, under a permanent cloak of anonymity.

Presumed Guilty is a harrowing true story that examines our flawed justice system and an impassioned plea for us to reconsider the way our police handle cases of alleged historical child abuse, to protect innocent people against further false claims.

“The infuriating, terrifying true story of how Simon Warr – one of life’s great characters – was almost destroyed by someone else’s lies.”

“A gripping, at times chilling, account of a dedicated teacher’s fight for justice. Beautifully written.”

“A typically brave book and strident defence of the innocent in the face of a moral panic about sex abuse in our society. Notwithstanding the genuine problem that this issue is today and the real victims out there, it still cannot be a licence to destroy the reputations and lives of innocent people. This account speaks to all interested in fairness and justice.”

“The issues it reveals are as important as the story it tells.”